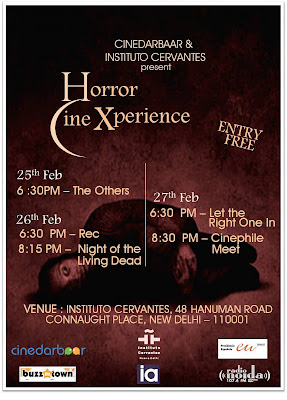 The Indian Auteur Tm, run a small independent-cinephile lead' Cinedarbaar Welfare Society', under the leadership of artistic director, Supriya Suri in New Delhi, India. The society is extensively involved in pushing film education, the ideas of film programming and showcasing films in schools, colleges,villages, towns and cities its involved in creating a forum for discussion, learning and debate.

...And creating a space against the tyranny of Bollywood.

In Feburary, Cinedarbaar is organising its latest event called ‘Horror Cine Experience’ at Instituto Cervantes or the Spanish Culture Center from the 25th to the 27th of Feb 2010 with media partners in the form of Radio Noida and BatchBuzz Read More