The two times Palm D Or’ winner quipped, “I always hope that I’m not so bad”, at the party held after the remarkable screening of the film, at the Cannes Film Festival, and the Serbian flair of trumpet, horns and songs played while the crew and well wisher danced to the tune; the movie had ended with a standing ovation. Underground is unlike any other film I have seen, it’s got the humor and flair present in movies like Life is Beautiful and Dr Strangelove, and at the same time it’s got a mix of documentary and fiction like none other movies based on the horror of war, it’s a cross between tragedy and comedy, basically the movie is a tragicomic satire.

Where Life is Beauitful and Dr Strangelove fails the movie succeeds, what movies like Saving Private Ryan, Schindler List wanted to achieve this movie achieves, and where Communism and Capitalism clash this movie deals. Underground is a tale about two friends, and their journey through World War II, and beyond. It’s a tale which not only shows hope, horror and aspiration what war brings to the world, but above all the movie really highlights the evil of human emotions and human folly, the movie is even more relevant today then when it was released. The relevance is not in highlighting the horrors and showing war in all glory, (Perhaps Steven Spielberg could have learnt a thing or two from this movie, and not go all out in creating theatre out of war), but in highlighting human hypocrisy. When Marko convinces his buddy to stay in a cellar for 15 years, and goes about changing his own tales of war. While creating a history out of lies; personal glory over truth, and it’s at this precise moment, when hypocrisy of the human soul out lives the truth, the movie shatters the faith and belief of karma.

The movie is a political allegory, it gives us a sense of history, a feeling of being present with the central characters; Marko, Blacky and Natalijia, and really outliving their tales in a special way, the journey from supporting the resistance against the Germans, as they bombed Belgrade, and invaded Yugoslavia to the final image of reaching a place where brotherhood and feeling sublime into truth, fittingly a close replication of heaven, a similar image echoes in my head of Godard’s Notre Musique, where the Gates of Heaven are Guarded by the US Marines, and it’s a lush green place, where people play, dance, sing and read. 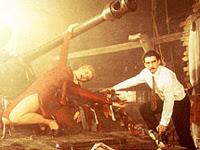 As I sat watching the movie it made me question the relevance and the meaning of war, without the philosophical quipping of The Thin Red Line, the movie presents the horror of war, and evokes question through imagery, which are a mix between reality and the fragments of reality, while fiction and documentary go hand in hand- Shots of Mako and Natalijia are played with archival footage of bombing of the city, and final rise and fall of it’s great leader, Josip Broz Tito, leader of the Socialist Federal Republic of Yugoslavia. What really makes this movie a masterpiece is allowing us to be part of it, yet leaving the decision in our hands, the freedom of choice, which movies don’t offer. The choice to understand and comprehend the horror, the hope and the laughter of it’s central character, Marko, Blacky and Natalija or simply ignore and laugh, assuming your blindfolded. How many movies based on such themes offer us the choice, definitely not Spielberg’s movies based on the World War-II, however, the one movie which resembles or is similar in it’s illustration is Stanley Kubrick Dr Strangelove, both movies deal with the similar theme and using intelligent humor, peculiar characters and detached plotlines

Every character in the movie feels real, by which I mean one can feel as if the person is living next door to you, as the acting is nothing less than fantastic, yet they don’t allow the systematic motion of empathizing with them, a certain kind of Breachtian cloak is put over them, they make you laugh, they make you feel the inner turmoil, and evil of human emotion, yet identifying and going in their shoes is what they don’t allow, never before characters in film seemed so close yet so faraway.Perhaps the only person who achieved a total detachment from the faces, and body language of actors was the master Robert Bresson, whose models(as he called them), acted with a certain sense of dry, stoic facial and body gestures, yet when they moved and breathed in his space, the result was breathtaking, another key element in the movie which influences the mise-en-scene is the music of the movie, the movie has a very mesmerizing and captivating band which plays along the entire time in the movie, as a matter of fact, when I paused the movie halfway through for a snack, the only thing which played in my mind was the music, it was not catchy like a Britney Spears song would be, but it was more like how musical composition would work on your brains after continuously listening to it for hours.

Emir Kusturica weaves a magical film from a play and novel by Dusan Kovacevic, taking each of the characters out of the boundaries of the written text to image, he transposes a fable and documentary, fable in a way the narrative and it’s set of character inhabit and move in the given frame of space and time, and documentary in the representation of those characters on the foundation of history; truth and fiction come alive in this movie- when Marko is seen being part of Tito new Yugoslavia one can witness a moment when the time freezes and outwits the film image, digital versus imagery. I was a 11 year old kid when this movie released, and today when I witnessed this work at 21, without any clue of the history of Yugoslavia, and Tito about whom I had read in the History text books, as a key figure in signing the NAM movement, I realize how important the movie is not only telling us about the world as it stands today, but showing how we humans really are, and the only lament I can think of are the words of William Wordsworth, when the movie drew to a close and the whole ensemble of cast are slowly broken away from an island.

“What man has made of man”.
Emir Kusturica Reviews Underground