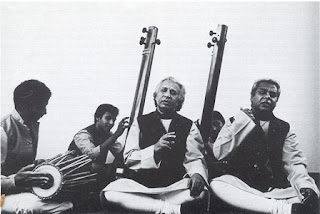 While watching Mani Kaul's Documentary – Dhrupad, where one of Dagar brothers is reciting a raga and is completely focused, but suddenly he [vocalist] becomes conscious of the camera and people around him. He looks directly at the camera - the gaze [not a deliberate one, but the director kept this as it is] transposes the Master from a world outside our realm into a mere human being, as if, to show, that he is vulnerable as much like us. The Camera captures the ' Gaze', and disrupts the unison that the Master instills between him and heavenly blessing, and here he becomes a mere subject being photographed and captured.


The Documentary starts with a Sutradhar [played by young Vinod Nagpal, a talented actor].The Director’s intention are to describe/elaborate a classical form of music - Dhrupad. Whenever you are making a documentary, usually the practice is to describe/lecture/demonstrate/educate the viewer. It is as if one is viewing something from a distance - Realism? Subjective & orchestrated - recording reality (usually we assume that parties involved in a documentary are not aware of the camera recording their activity, [natural?] but infact they are) - that gaze provides objectivity [although momentarily] to this documentary.


Gazing and seeing someone gaze upon another provides us with a lot of information about our relationship to the subjects, or the relationships between the subjects upon whom we gaze, or the situation in which the subjects are doing the gazing. Documentary filmmaker Errol Morris invented a device called the Interrotron which allowed his interview subjects to make direct eye contact with Morris while simultaneously looking directly into the filming camera. It allows the film's viewers to maintain eye contact with the people in Morris' films, giving what some describe as a more intimate acquaintance with them.

Dhrupad, a 72-minute long film which features two famous masters, the Dagar brothers of Dhrupad school of Indian classical music, is truly a pioneering work in the sense that nothing quite like this had been attempted before. It not only captures for us, and posterity, the magical quality of the two great masters' voices, but provides a valuable clue to the evolution of their art with its beginning in tribal music; Mani Kaul puts forth the argument that tribal music had two aspects: one concerned itself with ritualistic hymns and the other related to changing seasons, as also birth, marriage, death, etc. While the folk music stayed in the villages, the ritualistic music evolved into classical music and moved to the courts. In a simple yet effective structure, the film opens on the historical monuments at Gwalior, Agra, Amber and Mandu to the accompaniment of veena* recital. It is in this setting that the great Ustad Zia Mohiuddin Dagar explains the intricacies of Dhrupad style. The concluding passage of the film is on a panoramic shot of Bombay as the music reared in the courts of princely states undergoes a subtle change in a vastly different, industrialised milieu. Shot with immense love and care for tone, texture and colour, it is a landmark film.

nitesh said…
Satyam, you bring out an interesting factor about the documentary, and I did chop in this particular part and searched if their was something similar anywhere in the Docu, but this ' Gaze' simply exist on its own.

I think,the ' Gaze' more so,liberated us from the whole mode or actual documentation of the whole music.

I found this ' Gaze' slight disorienting too, when I compare it with entire documentary; yet- liberating.
June 4, 2008 at 12:38 AM