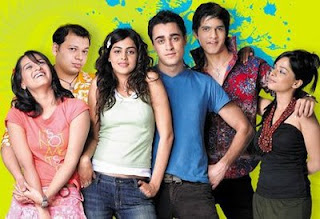 We often went to the movies. The screen lit up and we trembled…But more often than not Madeleine and I were disappointed. The pictures were dated, they flickered. And Marilyn Monroe had aged terribly. It made us sad. This wasn’t the film we’d dreamed of. This wasn’t the total film that each of us had carried within himself...the film we wanted to make, or, more secretly, no doubt, that we wanted to live.


Jaane Tu Ya Jaane Na is a film of the 21st century, born under the eyes of the producers, marketed viciously under the lens of the PR team, hyped and buzzed to such a state that one is made to believe this one would be different from everything else being made in the country. But like many of its similitude’s in Bollywood, this film too is just a marketing gimmick. It does not have the naïve innocence or even a well carried narrative like QSQT(Qayamat Se Qayamat Tak), neither does it have well laid characters like Dil Chaatha Hai, nor does it have any foundation on which innocent love could be explored; something which this movie was to deal with, and to top it all, even the idea to slight alter the narrative with flashbacks serves no purpose, in short , its just another movie, another feel-good- Bollywood- film, but even in that department it’s a let down. Therefore, when the girl to whom the pure innocent and greatness of the couples love (Imraan Khan and Genelia D’ Souza) was narrated; she kisses them on their arrival (as she appear overwhelmed with the power of love); but it just seemed too rigid and fake, because the photographic character felt empathy towards their love, but this could not be felt outside the cinematic space, I personally, as an audience, felt a scorn for being cheated, after all, from the opening disorienting camera movement, with loud chatter, sudden zoom –out- shots, and quick cuts; we could guess what to expect- same old story, and same old mise-en-scene.


Jaane Tu Ya Jaane Na is about Jai Singh Rathore a.k.a Rats (Imraan Khan), a Rajput who doesn’t believe in violence and Aditi Mahant a.k.a Meow (Genelia D’Souza), a cute and violent girl. They are the inseparable friends in college who everyone thinks are happily in love. Things turn ugly when their parents decide to get them married, and they realize they are just friends. And never did they think of each other as lovers, so what follows next is something which has been repeated in Bollywood film chronicles ever since the dawn of our cinema and exactly in the same mannerism. I wonder why so many ingredients and sub-plot are inserted without purpose, instead of just exploring the duality, complexity of human nature especially the “youth” the film set out to depict.

The film is supposed to be a coming-of-age tale where the promises, insecurities, and the ever fleeting nature of love, friendship, the desire to seek and realize when one is young were to be shown- something one believed from looking at the trailers: the pepped up Jazz theme song, the semblance it had to our everyday realities, and the freshness it projected, but I didn’t know I would be duped. Except for few comic setups involving the trio of great actors: Naseerudin Shah(Jai’s dead father), Ratna Shah Phatak (Jai’s mum) , and Paresh Rawal(police inspector), the whole film is made up of witty lines, which sometimes are good, cute exchanges of names and gestures and, plot, which is pure laughable. Since, the film is a mixed bag; it tries to be funny; it tries to expose hidden emotion, and it also tries to capture the zeitgeist of our generation: through the use of lingo, setting and plot. But the reality is that it fails on most counts.

It is not a film about “youth” since even before their college lives could be explored- our characters graduate, leaving a void to explore the dead time and moments related very closely to our lives. And even their bonds of friendship are mainly narrated, but never shown building up, so we are already placed with paper cut characterization whose development through the films is stagnant. The entire college life is summed up in one single song and brief fight scene, which is mainly used to establish the characteristic of the protagonists, otherwise nothing much else happens in college. Hence the “graduation party” appears extremely plastic and one dimensional. Read Further


Rating:*
The article is an excerpt from my review on Cinema Without Borders web-zine
Bollywood Reviews

Anonymous said…
A movie that refresh us after a long-long time.
I always believe in newcomer or living Legends.
Good work Aamir & Team.
August 5, 2008 at 6:21 PM