The Secret of The Grain 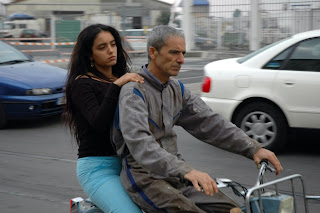 The Film We Accompany, Raymond Bellour

A family lunch gathering in Abdellatif Kechiche’s The Secret of the Grain reminded me of my joint family, and how every meal we shared was like a celebration: where ideas collided, views were exchanged and conversation of everyday objects and desires unified with social drama and politics. The essence of the movie ‘ The Secret of the Grain’ is the same- a story about a family, a story about a desire and a story about an individual hoping to bring meaning to his life. Slimane (Habib Boufares) is a Tunisian immigrant living in France; he is forced out of his job and decides to fulfill his dream of converting a dilapidated boat into a family restaurant taking the ‘secret’ recipe by his ex-wife — a fish couscous — and embarking on the journey with the help of his mistress’s daughter.

On the surface, the narrative could be misleading in believing that the film is a clichéd portrayal of the human spirit in the cinematic tradition of Hollywood or expressing the social, political and individual angst of the society like the French New Wave. But the film resembles neither of these cinematic conventions nor is it a bourgeois drama, because the mise-en-scene that gives birth to the images we see onscreen are unique in its conception and a step forward into the evolution of French Cinema as a whole.

The narrative is layered on three harmonic scales: individuals against their country of adoption, individuals against their own social being (race) and an individual against his own social existence — a crisis that could be existentialist in nature. Slimane hardly speaks throughout the course of the film while, contrarily, his family just can’t stop talking. It is precisely this absence of expression in the characteristic of the central protagonist that a voice is desperately seeking out for survival, trying to form a reason for the diversity that his adopted country provides and contemplating with the idea of hope that is a central motif of existence of our own lives. And when such question about everyday existence is seen beyond what is represented in the film we realize that these words — survival, hope and diversity — vibrate with the immigrant population in France.

Each of these conflicts in the narrative is built around the central character (Salimne) irrespective of his presence. The scene often revolves around the family’s centre of interest and mundane chores, for e.g. when he visits his daughter house to drop in some fresh fish, the scene does not offer any concrete action in terms of plot development rather its evokes a semblance that is part of our everyday lives. Since such scenes offer no drama in particular to keep the audience anticipated for a spectacle, however, it gives the freedom to look beyond what is normally forced upon us.

Interestingly, it’s Salimne who helps us get acquainted with his family. He rather works as a guide to introduce them, and then gives audience the space to help us see each of them together as a family and individuals in his own absence. This really helps us see shades of love, hypocrisy, lies, and mistrust among the family members and within the French bureaucracy and gives us ample amount of time to think about the movie without being forced to do so irrespective of how you decide to watch the film.

The cinema of Robert Bresson was about movement and gestures of hands, and the cinema of Abdellatif Kechiche is about faces. The entire film is shot in a style that could give one a feeling that he is watching a documentary because we witness such banal conversations enacted onscreen with such a precision that it could fool one to believe that it was all unfolding in front of their eyes, but this is not the case and this is truly where the greatness of the director lies. Adelatif Kechiche moulds this movie with non-professional, shooting in a breezy cinema-verite style where the ASL (average shot length) resonates with the overlapping dialogue and situation depicted in the film. Hence a normal conversation about baby diapers could give a feeling of actually being present in such mundane conversation and it could give a déjà vu- not of lost time, but the dead- time of our lives where actions don’t represent drama.

There has been a long history and tradition of the French talking a lot in their films with each decade giving us glimpses of the changing tradition and influences of film-makers that force the filmic character to behave in a mannerism that could relate to the auteur. And it also is a mirror to the changing social and political climate of the region. So in The Mother and the Whore, Jean Pieree Leaud talked a lot and so did the women in the film that exposed their inner lives to us and offered a sneak peek into the life of the auteur Jean Eustache and France after 1968. Similarly in this film, the women talk a lot and the male take a slightly backseat in expressing themselves. Perhaps, such depiction could be outright fiction in the conceptualization of characters but the gestures, expression and the surrounding cannot be built. It simply comes from within our everyday lives and in this case the writer of the story who is also the director, so the ‘talking’ offer a coup d’oeil into the inner lives of our characters that is a direct reflection of the community he is depicting. Since a trajectory is established between the writer, director and the film we are watching and they all go back to the same source of its existence. This offers an interesting look at the role of woman in the Tunisian community, because be it Salimne’s wife or daughters, each one of them holds a firm and prominent place inside or outside a home without the bondage of patriarchal dominance.

John Ford loved landscape, so did Michelangelo Antonini, but Abdellatif loves faces (close-up), the dialogue of the film, and the faces of the character offer the audience a connection to form a bonding with images and the sound in the film wherein once we walk out of the theatre, the faces of the characters keep lingering in our head and the banality of the dialogues still manages to bring a smile. Hence the smiles on our faces and the figments of images accompany us because from the central character Salimne to his mistress daughter Rym(Hafsia Herzi) and every family member forms an impression(acting) that is simply hard to shake-off. During one of the family conversation, I walked out to use the washroom and when I came back, I could still feel that I had not missed anything at all, because it felt like being a part of a family. And so when you are in a family, one is aware that no matter where you go and come back, the family members much like the filmic characters will still be stuck on the same conflicts and dilemma as if they are moving in circles. All you need to do then is adjust your chair, look around the faces of the filmic character, and it won’t take much time before you realize that it’s not a story about you or me but everyone we know.

In Edward Yang’s family drama Yi Yi which begins with a wedding and ends with a funeral one could feel part of the celebration and the mourning, because there are not many family dramas that give you a space to be an individual and allow you to think and, at the same, coax you till your throat because of circumstances that is beyond your control and yet offer you the warmness and hope of being part of the family. The Secret of the grain offers ample amount of warmness, despair and anticipation irrespective of caste, culture, creed and aesthetics- it offers pure cinema.


The Secret of The Grain is a NDTV Lumiere release in India, check your listing for schedule.
Reviewed for Dearcinema.com
Dear Cinema French Cinema. Reviews