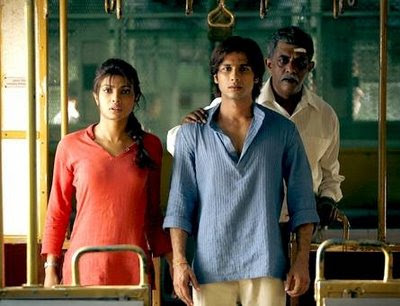 Indian film reviewers and trade analysts( who act as critics ) are head over heels with a new " Bollywood" film called Kaminey. So, inspite of the tight scheduled of our cinephile team, who are working on the special issue of Indian Auteur and the new version of the website- that is launching next month. Our team mate Debojit Ghatak managed to jot down few words on the film part of the so called " Indian New Wave" :-

Among other headlines from the world of modern fashion, the hand-held is now in vogue. The shaky, apprehensive, hesitant hand-held, that lends a sense of unrelenting urgency to a scene. That replaces the compulsion of aesthetic with the luxury of post-production. That eliminates the need for a dolly track, or a cut, to manage disconcerting proximity with the actor’s skin. That replaces meticulous blocking with a single continuous action (shot in infinite takes). That subjugates the possibility of space, and restricts the actors in mid-shots and close-ups. That announces the confirmation of coverage as the method of cinema, and when shot on real location, announces the death of mise-en-scene. Vishal Bharadwaj’s Kaminey is the latest issue of the fashion magazine Read More.

Just Another Film Buff said…
With Masand's MUFT WATCH verdict, I guess Kaminey is a critical success and not to mention the huge popularity with the viewers. Let's see what this leads to...
August 15, 2009 at 9:14 AM

nitesh said…
Thanks for the comment, JAFB. It's a chain reaction... what is really amazing is to see how the so called critics etc evaluate film and put a stamp on them without a single thought or the idea that cinema does not exist in vacuum.

Like you said before the movie with its pre-marketing and advertising gimmicks was already a packaged hit even with critics and viewers.

So its already a masterpiece for everyone even without actually answering the basic: " Why the hell is it a masterpiece"?
August 15, 2009 at 10:36 AM

HarryTuttle said…
This is a very interesting interview! When did it take place? And what is the target audience/fame of this network?
Half an hour on TV with a non commercial filmmaker? This doesn't happen anymore on French TV... So things are not so grim in India.

He's defending a good cause, of course. But sometimes he seems to be over-selling it though... Cinema is not more universal than paintings or music, even with subtitles.
And there is a such a thing as "mainstream" and "being outside of mainstream", and unfortunately it's the mass that decides who's in and who's out, it's not the filmmakers themselves.
And most of fine arts in history have been made for the elite and seen/heard/read by some kind of a social/cultural elite. Most masterpieces were made for God(s) or Kings, for people with money... Museums opens to the public is a very recent thing in history of culture. The mass didn't get to enjoy great art.
So when he says that art doesn't exist if there is no audience for it, I disagree. Art exists by itself, when the artist conceives it, even if nobody gets to experience it or if it is only discovered/reappraised decades or centuries later...

It doesn't matter if the audience doesn't go watch "boring art films", these films should still be made, for art sake precisely, because it's not the (dumb) audience who decides what is worth making. And art doesn't have to entertain people, nor lots of people.
August 15, 2009 at 3:58 PM

nitesh said…
Thanks for the comment, Harry. The interview took placeon the 14th of July, and NDTV is a popular mainstream news channel, although this particular network is a partnership between one of most respected newspaper in India The Hindu and NDTV(New Delhi Television Network). So their coverage and presentation is definitely much better than most mainstream news channels. And the target audience is quite large too.

I was surprised to actually find this interview. After all, it's something we hardly see on Indian television. And to dedicate an half an hour slot to a director like Adoor... is kinda unheard.
August 15, 2009 at 9:47 PM