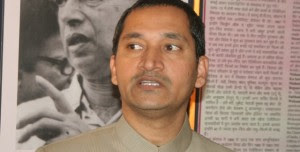 You said in a press conference that out of the 43000 feature films that have been made in this country since the dawn of cinema, only 5000 have been preserved. What do you believe justifies this callous attitude towards our film heritage?

The tendency to preserve is not inherent in our culture. There is a clear lack of initiative in the field of archiving. There is also a lack of a proper series of steps being taken by the established authorities to educate the young generation of film lovers, or even the current members of the film fraternity.

Do you believe that this lackadaisical attitude also stems from a disinterest from a commercial standpoint in the preservation and later, exhibition, of these films?

I believe that these films, once released, will definitely find a commercial audience. There is an also a sustained effort from our side (NFAI) to upgrade these films to more updated formats – for instance, the present edition of IFFI features an exhibition of 5 obscure Indian films – includingRojulu Marayi, Marthanda Varma, Ashok Kumar and Parwana, in their blu-ray versions.

So there is an audience out there. And you have updated films to contemporary formats. Will we see them commercially releasing anytime soon then?

No. Because currently, there are too many glitches in the process to allow one of these old films to release in theatres smoothly. NFAI only preserves these films. We do not hold the copyright to them. The copyright is still held by the producers of the film, and even if we were to enter a profit-sharing partnership with them, the process itself is ridden with just too many roadblocks. Most of them are third-generation inheritors of a film that was made, say, in the 1940s, and while they are ready to let go of a film, they refuse to let go of a legacy. READ MORE