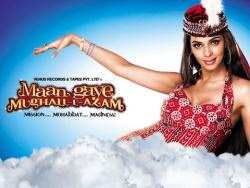 First things first, Maan Gaye Mughall-E-Azam is a film with a difference. It has a boring first half, extremely dull song sequences, and basic narrative meltdowns. However, irrespective of all mishaps, just like the incoherent structures and repetition of the plays performed by the theatre group in the movie, the film manages to wind up and become quite watchable by the time it ends. The film belongs first to Paresh Rawal, second to Paresh Rawal and third to Paresh Rawal.

The movie opens with a montage which helps us understand the basic plot, place and narrative structure of the film. Although what precedes the montage makes the whole sequence a misnomer. Since everything what the montage set out to establish is purely laughable from the narrative and plot development point of view. The setting (St Louise), the year (1993) and the basic foundation of the gags (the underworld) has been a staple diet in Bollywood for churning out mindless comedies and it is precisely here the film becomes just a routine comedy. The film is set in a coast town St Louise near Goa which is known for their underworld activity and links to Dubai. A sinister plan is uncovered to transport RDX to carry out a series of bomb blast throughout the country and to overturn this catastrophe, an undercover RAW agent Arjun (Rahul Bose) visits St Louise to break into the system. Here he falls in love with Shabnam (Mallika Sherawat), a theatre actress married to Majumdar (Paresh Rawal), the two of them working in a theatre company.

The success of Pyar Ke Side Effects (2006) seems to have made Pritish Nandy foolishly believe that anything with light-hearted comedy and Mallika Sherawat (who as usual emotes more with her skimpy dress and body rather than her facial expressions and gestures) could bring the public to the theatre, but sadly this wasn’t the case in his last venture - Ugly Aur Pagli and neither does it appear so for this film. The first half is spend trying to build chemistry and a connection between Shabnam and Arjun but every single inch of their antiques are filled with dry humor since their dialogue does not even carry the basic necessity of a comedy - the need to make people laugh. Besides, neither does it offer any sort of insight into the milieu and year that the film set out to establish. Rahul Bose who plays Arjun appears stiff and out of place a number of times and while his comic timing in terms of dialogues delivery can be good, his body, expression and gestures are so stiff that he does not fit into the whole genre per se.

It is precisely the presence of Paresh Rawal and his characterization that binds the whole film from the beginning to the end. He has now become a veteran of this sort of comedy, which is based on well-laid out characters whose materialistic and realistic gestures, expression and outlook are properly established, but who move about in a world of clichéd plot development. Hera Pheri (2000) brought in some sort of freshness in the genre years back but today the market has become moribund for such forms of expression, since the same narrative style and development has become a clichéd norm for the industry. That is the main reason why there are very few developments in the forms of cinema in our industry. A similar tactics can be seen in the music too. For example, the basic success of incorporating a hip-hop track or beats in a song started with Bluffmaster (2005) and ever since the trend has followed suit. The genesis of such trends can be felt even in this film.

Let’s face it; it often seems we don’t need directors in Bollywood since most of them never bring any sort of individuality to their film direction. They could be working hard, sweating there hearts out, but when it comes down to making films, the mise-en-scene is repeated over and over most of the times. Sanjay Chhel similarly does not bring anything in terms of formal development in cinema that a director has the ability to address and bring forth. Even after the formal and commercial failure of his last two ventures (Khoobsurat (1999) and Kyaa Dil Ne Kahaa(2002)) he has not grown at all as a director. Admittedly, as a scriptwriter he has certainly tried to incorporate an unique set-up of having different planes of action building up through the medium of theatre. But sadly, the idea certainly does not materialize onscreen. Perhaps, the comic setups had some sort of an allusion to the classic black comedy Jaane Bhi Do Yaaro (1983), but sadly, the only thing similar between this great film and this movie is the theatre (where major portion of the film unfolds) and that it takes its inspiration from the classic ending of Jaane Bhi Do Yaaro, beside Sanjay Chhel was noble enough to plagiarize from Ernst Lubitsch’s classic To Be Or Not to Be (1942). But, Man Gaye Mughall-E-Azam Has neither the flair of Lubitsch nor the narrative of Kundan Shah, so the whole framework of well-coated 'inspiration' falls flat on the surface. A good satire could be made on our very own industry people who always are looking for the ‘ right’ script to make a film, but every year the right script does not land up, and its absence haunts us.

The film definitely does not bring out anything new from what we have seen in Bollywood except trying to incorporate a set-up of theatrical version of Mughall-E-Azam being enacted on screen, which concurrently moves with the overall plot. But such a unique set-up becomes lost when the film picks the trucks of Bollywood clichés and stereotypes and bombards it on the same stage. No wonder the mere absence of Paresh Rawal in the scenes brings down the film. It’s he who controls the chords of pace, rhythm, and entertainment factor in the film and Maan Gaye Mughall-E-Azam is definitely his film and he is the only reason to stick through if you have made the choice of watching this film.

The review is republished here from my article on Upperstall.
www.upperstall.com
Upperstall