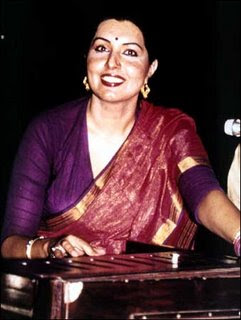 Every culture has its own aesthetic temperament. So the Western concept of harmony is alien to classical Indian music, which uses melody alone. The Western method of teaching music is through written notation while Indian music has an oral tradition of learning. A Western classical musician interprets a composition while an Indian classical musician improvises, developing upon a particular composition. Also, Western rhythm is linear whereas Indian rhythm is cyclic, having a precise beginning which is both a point of arrival and departure in every time-cycle.


Classical music differs even in North and South India. From common roots, entrenched in ancient scriptures, grew the Raga system of music that later split into two distinct styles, the hybrid style of North India, culturally impacted by foreign invasions, and the unalloyed style of South India. Dhrupad arose from meter-oriented chants in North India and was originally sung in temples. Then music from temples entered palaces and another form of vocal classical music emerged, called Khayal. Its offspring is Thumri, a genre that fuses urban and rural traditions by giving classical treatment to folk songs. Classified as light classical music, Thumri and its allied forms are engendered by romantic love, one of the nine emotions governing human lives which are named in a 400 B.C. treatise on music, dance and drama. Thumri dominated the culturally vibrant 19th century royal court of Lucknow, a city renowned for both art and etiquette.

The popular belief is that the then ruler, a supreme aesthete, created this form, though academicians believe it existed much earlier. The role of the courtesan in the development of this genre was considerable. Renowned singer-courtesans contributed to classical music by giving light classical forms greater classical gravity, so even male classical stalwarts included Thumri in their repertoire. During my first lesson, my teacher, a legend in her lifetime, told me to sing a word within three notes in as many ways as possible while expressing the emotional content of the word. This was a rudimentary lesson in musical phrasing. To musically elaborate a word or phrase is the idiom that defines this genre. To continuously change note-patterns while repeatedly singing a word or phrase, arousing emotion while deftly weaving musical variations, displays the singer’s range of imagination. These musical phrases are rendered in accordance with mainly two schools. One school can be described as a simple but beautiful village girl and the other as a sophisticated, bejewelled woman. These schools follow the Raga system of Indian classical music. In the vast Raga galaxy, each raga is a melodic form with a precise structure, its specific ascending and descending scale stressing certain notes and phrases. A raga is associated with a particular time of day or night and sometimes with a season. Classical and light classical singers handle Raga differently. While classical singers adhere rigidly to a raga’s format, light classical singers judiciously use forbidden notes or enter other ragas. Raga unfolds within the rhythmic structure of Tala. Each variety of Tala is a framework of fixed beats measuring a unit of time. All talas emphasize the first beat, a moment arrived at with mathematical exactitude, when the singer meets the percussionist after every passage of improvisation, in both classical and light classical music.

The allied forms of Thumri

Thumri is linked to Dadra. The word dadra is derived from dadur meaning frog, as the form’s sprightly rhythmic movement resembles frog-leaps. Faster paced, sometimes with more literary content, this classical version of folk music is more earthy than Thumri. Along with rhythm and tempo, the stylistic difference between Thumri and Dadra lies in the musical phrasing. The musical phrases in Dadra, tightly entwined with the rhythm, maintain its lilt throughout the melody while the leisurely phrasing of Thumri is languid as the tempo is slow.
Sung either in the style of Dadra or Thumri are seasonal songs associated with the Indian calendar. One of these forms, Kajri, usually laments separation from one’s beloved amid lush foliage and dancing peacocks. Also capturing the lyricism of the rainy season is Jhoola, meaning swing, which evokes the joy of rain-drenched earth after sweltering heat, when girls in rural areas sit swinging on wooden planks tied with ropes to trees. Jhoola’s musical phrases should convey the swaying movement of a swing.

Ghazal as related to Thumri
In linguistic contrast to these rustic lyrics is urbane Ghazal, a literary form which matured in Persia around the 10th century and later came to India. Adapting to the Indian ethos, its poetry is written in Urdu. Having Hindi, Turkish, Persian and Arabic words with an Indic base, Urdu germinated in military camps but later entered royal courts and acquired exquisite elegance by the 18th century. The Urdu Ghazal is traditionally sung as the offspring of Thumri. My teacher once told me that the poetry in Ghazal is like a painting and its musical presentation is the picture-frame, which must enhance but not dwarf the poetry. Ghazal consists of couplets. A couplet contains the full development of an idea in just two lines. It is a complete poem in itself. All the couplets in Ghazal share a common meter and rhyme scheme but are thematically independent. They need not have continuity of thought. This is Ghazal’s distinction. Ghazal originated as love poetry. The plaintive tone heard in Ghazal is ascribed to the anguish of love. Major poets extended the boundaries of Ghazal beyond love to include philosophical utterances.

No longer viewed only as a branch of Islam, within which Sufism has divisions, today Sufism has a wider appeal, transcending religious differences. It upholds humanism, the essence of all religions. A nonconformist counter tradition, it insistently peels off the outer layers of religion, emphasizing the core truth of formal religion- Rekha Surya.

Rekha Surya is the youngest disciple of Begum Akhtar, she had also trained under Girja Devi and carved a niche for herself in the world of Hindustani Light Classical Music.

Unknown said…
hi... thanks for sharing the post.i love music,without music life would be a mistake.sankar is one of the best singers in bangalore and my favorite too.if you people want to enjoy music apart of your problems just go to his shows,damn sure you will like it ...
September 3, 2013 at 10:51 AM