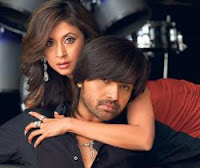 Karzzzz the remake, is a fantasy, and the only domain it belongs to is Bollywood. The film falls under the same branch of movies such as Farah Khan’s Main Hoon Na, Om Shanti Om or Anees Bazmee’s Singh is Kinng. However, what separates this from the very lot of ‘pure Bollywood films’ is that Karzzzz is a remake of a 1980 potboiler, that elevated mainstream storytelling to a new cinematic height; forming a certain shift in narrative and form. However, it still remained a pure work of fantasy; a story about rebirth, vengeance, greed, laid out in a surreal manner.

Hence, the remake becomes a double-whammy; a fantasy within a fantasy, so the first rule of the film is to actually watch it with loads of popcorn, burgers and colas cause without it the film would be hard to digest. When Himesh Reshammiya came alive on the silver screen in Aap Kaa Surroor: The Moviee - The Real Luv Story his mannerism in the film was unique like his voice. Similarly, in Karzzzz, excluding the ‘trademark’ Reshammiya cap, everything else is just the same. In Aap Kaa Surroor: The Moviee - The Real Luv Story, Himesh Reshammiya broke the barriers of melodrama and masala films, and in Karzzzz he raises the stakes higher. He is all over the film, playing a successful rockstar, Monty, in South Africa. He evokes an emotion that makes him more Himesh than a rocker; yet, we are made to believe in his emotions, dilemma, and his sudden realization of re-birth.

In Bollywood films, most characters have a peculiar and a very unique way of remembering their past, and reclaiming their lost eye-sight or memory to recover the lost grounds in the film narrative. In Karzzzz, Monty has a similar recurrence and vision while performing in one of his rock concerts, which looks more like Bollywood stage shows. The sudden vision leaves a profound impact on our rocker, who, then decides to go beneath the metaphor and symbols of his vision. The films picks up the basic ingredients of plot development form the original, but few ‘twists’ and ‘turns’ are added in to allow the audience to feel a sense of freshness in the ‘remake’, but that actually never materializes onscreen, because the basic growth of narrative through exposition, climax, and resolution is already clichéd and retold a thousand and one times on the silver screen.

When Monty without the help of hypnosis, Freudian psychoanalysis or Proust’s sudden recollection of the past, travels back and finds about the details of his vision: the mansion, his previous life, and a tragic accident, another jolt from the blue allows the audience and Monty to understand that he was Ravi Verma (Dino Morea) in his previous life. And everything he saw, he dreamt; was a calling from the past. Masala films actually are movies tailor-made for the audience, where the structure is like an instant noodle easily forming the fabula in our mind and the whole ‘cause-effect’ construction of moving in plot development then becomes funny and laughable. After all, we exactly know, and can predict sequences that makes the whole emotions, drama, and suspense a mere butt of a joke and hence laughable. Monty meets the late Ravi Verma’s wife Kamini (Urmila) who though portrayed in vamp like demeanor does not bring forth the elegance of Simi Garewel from the original.

Subash Ghai single-handedly made the original tick, even under the presence of Rishi Kapoor as the main lead. Here, Satish Kaushik is non-existent, the whole film could actually be shot by any other person and yet feel the same, taste the same, and smell the same. Let us not ignore the facts; first of all, there is no rule which says that ‘masala’ films should be low on its quality to create a new visual language or syntax. The film for most part looks visually attractive (cinematography), but this ‘attractiveness’ is different from ‘beautiful’, because the cinematographer simply ‘capture’ what is there, exactly in the same manner, same situation, excluding the subject from the surrounding, and hence it is the ontological beauty of the place (Kenya, South Africa) that makes it appealing to us, without any form of effort from the director, or cinematographer. Because it’s very easy to capture something to give you a feeling of a similar thing, but it’s very difficult to depict something, and form a different rapture, in the same stance and style as music.

To sum it up, Karzzzz is a pure entertainer; as it labels and markets itself to be, but even “pure entertainment’ is very much like a circus with an individuality where the clown, the trapeze artist and even the animals have their own distinctive style making it enjoyable and nostalgic. Sadly, today this instinctive individuality is lost in the name of entertainment, and most blockbusters which come with tagline of entertaining the masses are simply deceiving us.

Cross published from my review at Upperstall.

Deepak Kumar said…
Himesh Reshamiya got a hair transplant and is now a wannabe Rishi Kapoor? Karzzzz ?? thats the name of the movie?? were they serious about this? ROFL LMAO.... it seems Himesh Reshamiya likes jumping on the trampoline of stardom... someone has to pull the trampoline away.
October 19, 2008 at 1:44 AM

sudesh thapa said…
Download latest bollywood music for free and get the hottest news about bollywood on one spot http://bollywoodnbuzz.blogspot.com. No sign up and no email requried
October 19, 2008 at 9:14 PM

It looks like you are a movie buff, and frequently blog about movies. These Picture Gallery Widgets would be a great addition to the movie reviews that you write.

To start just go to http://chakpak-widgets.blogspot.com/ Find the widget which you like. Click on Grab this widget and copy-paste the HTML scriptlet to your blog.

We hope you like them. Please send us any feedback on the widgets and help us improve the widgets further.

Yayaver said…
you are wasting your time on lamenting upon these movies.to change the world,you have to make people more updated with information and understanding of art and cinema.I really get inspiration from your blog and advice you not to waste your genius talent on reviewing Karzzzzzzzz
October 25, 2008 at 6:27 PM

appreciate your comment and trust seriously... but that is my job to review mainstream bollywood films everyweek and, believe me, its a torture a lot of time, becasue even the text becomes a cliche when u want to write about films. As everything apperas just the same, and every week passes in another hope...this week, the prospect of watching Heroes is already haunting.
October 25, 2008 at 9:47 PM

Unknown said…
Awesome review.. Something I really appreciated in the review is the way you smoothly shifted views from the old Karz to the new one.. Moreover, you make it look so simple.. loved the review buddy..!! keep it up and may you continue this work and better ones in the near future.. All The Best..
October 26, 2008 at 3:56 PM

nitesh said…
@himanshu...well saw the film, wrote the review, and tried not to bring up the connection with ' The Motorcycle Diaries' as it would be a shame to the wonderful movie, but one could see portions of influence in Heroes for the same.
October 26, 2008 at 6:53 PM