The Servant's Shirt- An encroachment of 'Space'. 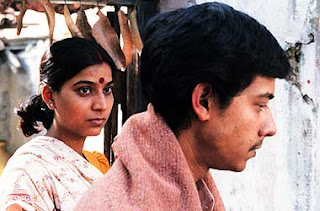 Without pretending to portray a period of history, "Naukar Ki Kameez" is steeped in the liberal pre-economic atmosphere that marked India in the sixties.The film evokes the special lifestyle that India fashioned for itself during fifty years of soviet influenced Socialism. Through the characters: the civil servant, the Sahib, who lives with his spouse in a colonial-type residence, the chief of the alcoholic bureau, Bade Babu, who whiles away his time as he looks for a servant for the Sahib, and Santou, the young hero in the film, and his wife, whose home is flooded every time it rains because of their leaky roof, the film suggests a network of hierarchical relations between people through sometimes subtle and at other times blunt illustrations. The secret manipulations the different characters indulge in, whether it be in their formal exchanges or in their friendships and intimate relations, are confined to the grotesque, as if the aim were to catch the other person out. Among all the protagonists, the capacity to endure the absurd leads to a passivity in which they shift between the tragic and the comic.


A film, when viewed, can demand two levels of examinations, one which places itself at a technical level, and the other, at a sub-textual level. Often, technique should be a mere means to an end. Often, however, it is not. Godard’s jump cuts have to be among the flashiest (perhaps, the flashiest) style device of all time, but without their objective of making aware the viewer that it’s after all a film, they are mere gimmicks. Scorsese’s voiceovers are super-cool, the king of cool, the Arctic version of the cool, but unless examined alongwith the planes of storytelling they create, they make mercury rise. And just that: Someone once said, ‘Technique without a purpose is simple sign of having fallen slave to the tools at hand.’

In the following article, I seek to examine not the technique, for that is obvious, (and perhaps a lowly aim for a self-proclaimed cineaste or cinephile like myself), but the subtexts or the themes recurrent within the film. Simply put, I will devote my energies not to how the script is written, but what it achieves. Whether the film intended the achievement or not, is ofcourse open to the luxury of subjective thought.

The film is essentially about the encroachment of the space of a ‘lesser’ element by a hypocritical, confused, and all-effacing ‘stronger’ element. Mind you, these elements are not necessarily societal classes only. Without making an attempt to clearly define an aesthetic, or commenting on it, I’d use the space given to me to identify a keen and recurring element in the film – that of space, its occupation, and their collective usage to construct a comment on the social employer-employee relationship, and also the concerns of the ‘laborer’ in the Indian context. However, the films also has a social, and a political underlying, for example:

The Kathal, Santu babu climbs the tree to bring it down, but is then he supposed to accept that it is; infact, a product meant for the Bade Sarkaar in the bungalow. It’s an ironical take on how the lower-class works hard, but the upper-class then reaps the fruit (quite literally).

Also, albeit more tragic incident within the film, is the death of the peon, Memho. One dialogue - "Koi aur Memho dhund lo” (Find some other Memho), makes clear his position as a replaceable and irrelevant element in the larger scheme of things. Ofcourse, the next day, 'Koi aur'(Some other) Memho comes as well

Once you watch the film, you will notice how much of it is about 'closed' structures being invaded or encroached upon, as an act which is representative of say, the encroachment of a person's dignity, privacy or private life. There can be three instances of such, found in the film-:

a) The House - The opening voiceover, "Ghar bahaar jaane ke liye nahin hota, Ghar hota hai laut ke aane ke liye” (The home is not meant for a person to be able to go out, its meant for him to be able to come back.) . One can see how the main character explains his fascination with the house as being the only place where he feels his dignity and self-respect that are not constantly challenged(like in the office), and where he can feel assured and safe. Now, when the roof of the house is damaged, and water 'enters' the house, it is encroachment. Encroachment of his private place, indirectly by his landlord, the doctor. Ironically, on who, he relies to get the house repaired. Here, it’s clearly the first of two class clashes. The upper-class doctor encroaches into the private sacred place of the lower-class clerk.

b) The Wife's trunk - She keeps it closed. The trunk is clearly the symbol of her personal space in the relationship. It’s a very strong feminine touch to the film: A married woman who chooses to guard her personal belongings (thus her 'space') from her husband. On the contrary, her husband (the stronger element) coaxes her to open the trunk. We can view this encroachment in a negative sense; but, it can also be seen, as a manifestation of her undying love for her husband, and her representation of trust in the relationship wherein she gives more importance to the preservation of her relationship with her husband, than to the sanctimony of her personal space.

c) The Shirt, or the Kameez - It’s a hilarious, satirical and rather ironical look on the employer-employee relationship. The employer decides the criterion, represented by the 'shirt', the third closed structure or enclosure in the film. Whoever fits the shirt gets the job. It’s the upper class fancy. Poor Santu Babu, inadvertently, and against his better wishes, becomes the object of this fancy, and in a strong paradox, encroaches upon a space, without his willingness to, and thus, the encroachment becomes the compulsion of the weaker, rather than the imposition of the stronger, as in the other two cases.


The entire film can thus be viewed as two individuals, the husband and the wife, being constantly subject to an 'authority' figure that they hardly wish for - the mother at the beginning, and the doctor who keeps asking the wife to do small tasks for her, the Bade Babu at the office, the main boss. In the end, however, its a rather solemn and peaceful end, as their child's on the way, they make a rather modest and silent pledge to preserve their self-respect and dignity, when Santu decides to not go to the bungalow the next day, and the wife shuns away the prospect of a visit to the doctor. It’s their peaceful and dignified rejection of authority. It’s their final quiet statement to preserve their own dignity.
Mani Kaul