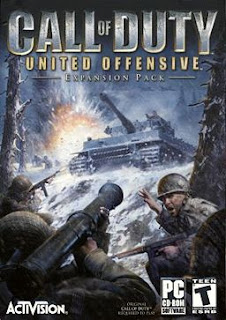 William Wordsworth’s lines certainly highlight the fact how war has torn the world into walls and boundaries. Wars have caused immense destruction from the beginning of human civilization; but video game makers seem to love every small detail and nuances of untold wars, unsung heroes and a place that is full of rubble and shattered debris.

I am not in the position to judge whether these games should really recreate the pain and horror that war is in reality; after all, there are no heroes in war. Nevertheless, I had the privilege to revisit war from the perspective of Gray Matter. I sincerely loved my revisit to the war torn lands. The guys at Gray Matter make you cling for your life. Moreover, they make you realize that with each gunshot, you are one-step closer to death. As war is not a single man’s toil, this game teaches you to fight together and play as a team. United Offensive builds on the original game, in making the franchise a lot more realistic; with each blast, gunshot, bringing you closer to the reality of war. The polished graphics hold you captive in the realms of World War II. However, the game doesn’t change much from its predecessor. It sticks to the same old doctrine of providing gamers with a rich, intense and thrilling cinematic experience & it sure does succeed in achieving its goal. The game focuses on allowing the gamers to relive some of the most horrific and brutal battles fought during the Word War II. Gray Matter didn’t go out and break any traditions nor has it outdone Infinity Ward (Medal Of Honor) in the World War II spectacle.

You experience the horrors of war by playing any of these three characters: Corporal Scott Riley (American paratrooper), S.O.E James Doyle (British commando) and Pvt. Yuri Petrenko (Soviet infantryman). Each of the three characters has a unique set of missions and countries. Moreover, the platoon, which works with you, assist you in the fighting. The game is all about simulating the war conditions. It feels very realistic when Captain XYZ tells you to move in your butt in the heat of battle. It is in those precious seconds, in which your chances of survival are determined. As you battle your way out of a frantic firefight you pray that the next shoot doesn't result in a–"Restart". The Scripted AI is convincing for most part of the game; your teammates do form a tough horde of wolves. So there is always someone to protect your ass. Sometimes, few of them will rush into the enemy fire, shoot their hearts out, and then end up being killed (why did they do that, I really cannot understand). They could have supported the team, and formed a solid backup with the pack. The saying goes:" Fortune favors the brave". This game does have its share of a few invincible heroes; men-of-steel who push the story along. Therefore, do not be puzzled when one of your peers never seemed to slow-down- even with hell lot of bullet pumped in.

I loved the original and the expansion certainly lives up to its name. It is the graphics and sound effects and the sense of brotherhood, which immerses you into the soul of the person you playing the game. Even if you don't empathize with the character like other FPSs, the game does present you with a touching, moving, and soothing experience. After every mission, I stopped and looked around. The memory of war kept conjuring up in my gray cells; causing a drastic change in my surroundings. Where all I had left was blood, bodies, & prayers deafened by wailing women, rumbling tanks and rattling guns.

Hope to revisit some more classic PC and console games and to write about them.
Retro Gaming

Aayush "Gravito" Shrut said…
Brilliant review...i still play Call of Duty as i believe Call of Duty and Medal of Honor is the best World War 2 Shooter Game...considering the way World War 2 is the de facto of Video Games...over 100 titles based on this...and yes we know Allies won the war!!!!
May 5, 2008 at 9:26 PM

Deepak Kumar said…
I just lost count of the many games based on WWII out there. Some of them namely Brothers in Arms, Medal of Honor, World War 2: Panzer Claws, Deadly Dozen : Pacific Theater, etc. are there, but I personally didn't like them as much as the games of COD series.

United Offensive is the second installment to the series which is way better than COD 3. I remember the sequence where you jump on the gunner turret of a jeep while being driven through enemy territory. You shoot down enemy soldiers and trucks, you tell the driver to take a turn ahead which turns out to be a dead-end full of enemy units all over, as the driver quickly tries to reverse the jeep, the adrenaline rush you get at that point can't be explained in words. The game may seem scripted, but it is fun. It makes you feel things which you don't feel in a typical just see and shoot FPS game. It puts you right in the middle of a battle and lets you feel the rush, horror and panic. The quotes you see when you die are very meaningful as nitesh bhaiya has mentioned. It tries to portray how horrifying it must be to witness war.