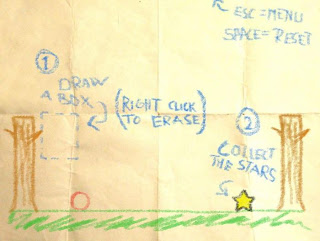 There are action games which are mixed with heavy and intensive role playing; that makes you sit hours hooked to it; and there are strategy games which takes the bolts out of your head; and there are racing games fast , aggressive which make you foresee whats coming next, but there are very less games which defines a genre of their own and, still, come out as a winner in terms of both game playing and addiction.

Crayon physics is one masterpiece form the indie game designer 'Petri Purho' who actually managed to grab the Best Indie Game Award. Crayon Physics was designed in less than seven days. First of all, the game has nothing to do with your Physics scores, the name outlines the basic structure and framework of the gameplay- the principle on which the entire game is based.

The gameplay is as simple as A, B, C there is a ball and a star and the sole objective of the game is to make the ball touch the star but, hey, it ain't so easy( I said- simple, not easy) there are obstacles: see saw, ladders, blocs and infinite space between the two. But you have been given the power to create whatever you want ( though in fixed rectangular format ). You can create blocs to put on the ball so that it can move further, the game play is simple and the introduction is well laid out so that you can understand the basic controls and schemes of the game.

The use of secondary objects in the game's environment is brilliant, the ghost lullaby is very contented and mesmerizing making the game more intensive, the background is like my old maths book ( though my mathsbook never used to be so clean though..sob!) which helps you to create objects more precisely.

Crayon Physics is one game which will not take much time to complete, but its worth giving a shot and I'm sure you will be amazed by its simplicity and uniqueness.

Crayon Physics is part of our ongoing coverage on Classic, Indie and obscure games.
Retro Gaming

Shashank Kumar said…
geees..thnx a lott supriya..i hav been waiting for dis for such a looong time.lol..thnax a lott...well honestly its not such a great post in contrast to what u people write ...i mean it good for a starter like me..try dis game its fun , its next version crayon physics deluxe is comin soon and i will inform u once its out...take care ..tata...:)
May 26, 2008 at 2:41 AM