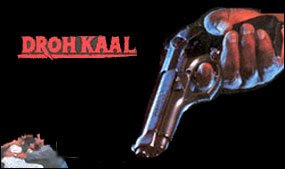 Just as the film title suggests, the movie is about the betrayal in the legal system . It talks about corruption, morals, duty, honesty, principals and how people due to circumstances have to bend upon their self believes and values.

The narrative deals with two dedicated police officers, Abhay Singh( Om Puri) and Abbas Lodhi (Naseeruddin Shah) leading an operation," Dhanush", against a Terrorism group by sending two under cover officers in their group, while the commander of the terrorist group, splendidly played by Ashish Vidyarthi, is under arrest and operates from the cell. Soon the nexus between the Police force and terrorism is unfolded, leaving Abhay bemused on trusting his own officers even his seniors. As the commande, Ashish Vidyarthi, sends in spies at Abhay Singh's house, and his family gets in trouble of being killed by them, the officer is not left with any choice than to reveal the vital secrets of Dhanush.

The act of Om Puri, surrendering himself due to the fear for his family- leads to the life of Abbas being in danger, when Abbas is caught by the terrorist to find out the under cover cop in his alliance, he chooses death over it. If there's a person who deserves attention in the film is Sumitra Singh, (wife of Om Puri), played by Mita Vashisht, with her terrific performance. She is a simple house wife but supporting her husband in every case possible. The death of Abbas and his guilt does make Abhay weak (which we see when Abhay tries to commit suicide), but watching his wife console his daughter, makes him weak, and he confides in her everything. It is then, his wife who encourages him. To follow the right path. There is a remarkable moment in the scene when Om Puri looks in a distant, and the camera captures his gaze in long shot, that the whole emotional and turmoil touches us without bringing forth any form of melodrama.

Om Puri moves on a path of redemption, his family is left behind in danger with two spies in the house. The story then deviates towards showing the sexual exploitation of woman, the way Indian men psyche work, and how lots of women having experienced such exploitation but choose to remain quiet. The spy, Anu Kapoor, is constantly after Abbas's daughter, when he tries to have sex with her and she faints, Sumitra enters offering herself and asking him to leave the young girl, to which he agrees upon. Even earlier he had tried to hit upon his daughter, but doesn't get a chance and opts to have sex with her spy partner to satisfy himself. Does a man actually just seek woman as a sex object? Does an evil mind lose control to such an extent? After such exploitation, murdering a man was just an expected reaction from the brave Sumitra, over which she doesn't shed a single tear.

The director has made good use of the off-screen space. For example: On finding IGP Pathak (Amrish Puri), treachery towards his duties, the CBI, comes to arrests him, he shoots him self off-screen which was also the most abrupt and unexpected. Another scene which really caught my attention was the beginning of the film when Sumitra kisses her husband, the subtlety of the scene really brought out a sense of reality that any couple would share. The film included very minimal movement, however, what was carried throughout the film was the camera tracking in between the conversation scenes such that it became over the shoulder shot. Subtle moves like tracking and panning were constant throughout the film, though I believe the blocking of the actors and the way space utilized on screen could have been better. Even the usage of sound was very minimalistic, used only when required.

While other directors other mainstream directors usually try to be time consumer and economical by saving on cuts and indulging into unnecessary zooms and moves of the camera, it feels positive that there existed what we call Indian Parallel cinema, wherein the directors were at least trying to find their style with a sense of aesthetics . The film had strong dialogues which were again written by the director. It was not my first experience with the director, the first film I saw was Ardh Satya, which had strong, good dialogues too, which only shows his strong command over the ideologies, notions and what is remarkable is the beauty with which he brings out the language through his dialogues. A very strong acting performance by everyone and a good theme is what marks this very fine film. Though its not one of his best film, but yet a worth watch.

Sachin said…
I had seen the film a few years ago and I remember liking it quite a bit. The last few scenes from the film stands out in my mind, when one realizes that the innocent person who is dropped in the well of lies, has his exit ropes cut off.

Also, the scene where the wife offers herself in place of the young girl was quite powerful. And then how she has strength to fight the guy off.
September 10, 2008 at 9:25 AM

supriasuri said…
Thats true, It was remarkable to see a woman being presented in such a bold state than those cliché and weak ones.

The movie was certainly good in terms of even representing the terrorist. especially the enconter between om puri and the commannder.
September 12, 2008 at 3:30 PM