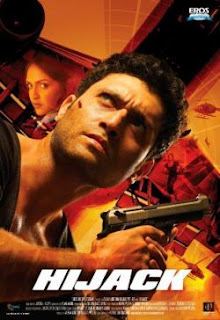 On Christmas Eve, Friday, December 24th 1999, six days before the millennium, Flight 814 (IC 814) was hijacked. It took eight days of negotiations, and a death to finally get the hostage released in return for three extremists. The entire nation sat and watched the drama unfold on their television screens, but what happened inside could be best described with these words: fright, despair, Stockholm syndrome, stench, prophecy, dream, illusion and nostalgia – in short, the passengers only wanted to get out alive. Moreover, the animal behind the basic human façade comes through in faces of adversity. It’s then humans behave and emote in true mannerism. Such an atmosphere when recreated and captured subjectively by the camera should reflect the two polar extremes of human nature – to kill and to escape, to live and to die-in the name of God, but sadly Hijack is miles away in form and content of the subjective matter and medium.

Hijack is a Bollywood film: it has songs, dances, hero, villains, heroine, and a “realistic” plot according to the norms and exception of the industry. To quote Kunal Shivadasani, the director of the film, “I feel a sense of accomplishment because I have not made a fluffy film. It is a well researched action thriller quite close to reality”. So does the movie capture anything from the above listed emotions, or does the movie have some form of semblance to the reality which is supposed to be depicted? Not quite. Not even close. The film could be described in two sentences, the action of Allan Amin happens to be its selling point- as ostensibly advertised, and the only ‘mystery’ is whether Shiney Ahuja saves the day or whether he falls in love. The story of the film involves a terrorist outfit hijacking a plane, and demanding the release of a terrorist who goes by the name of Rashid.

The opening of the film best describes the style and nature of the film: glossy and superficial. As the basic premises seems to be establishing the action of the film rather than build up on characterization and form, because when we see men in mask trying to rescue a terrorist using a chopper, and when you know they could win- they fail, by our men in khakis holding a rifle. One gets to know the depth of the script, the depth of the director and the methodology of the medium from the very opening. Because we have witnessed such an opening in countless films, and the only “deviation” is the failure of the rescue, but the entire film is based on this failure to rescue Rashid. This thin string of Bollywood fiction is the catalyst which ties the film and its characters in more of a clichéd set-up from the beginning till the end.

Furthermore, the tools used in the film to capture the fragments of reality (camera, narrative, actors) are distorted which make the film incoherent. There should be a simple rule of thumb for Bollywood, if they want to entertain, let the movie flow without much pomp and show regarding its narrative and plot line. Even though it’s laid with various mechanisms which are used to reproduce the schema of our existence, the film does not come close to reflecting the human emotions: characters are not allowed to grow and people are killed without any effect on the audience. Basic syntax of film grammar doesn’t exist in this film.

Even an entertaining film should have a cohesive pattern which holds the film from the beginning to the end, but this film is loose from its shaky start (with the clichéd close-up of the terrorist, and his Bollywood grin) to the finale of hero saving the day. And there are no brownie points for guessing neither the narrative nor the layers of plot-line, since it’s hollow and sparse.

People often talk about leaving one’s head outside to watch such a film, but how far could one leave their head behind, when what we see, what we witness, is supposed to be a re-creation of our everyday realities of space, time, and images. Perhaps, just by reading the film title the event that gripped through our nation flows back, breaking all bondage of time and space on the power of memory. If cinema and television stop reflecting about an event, it becomes labeled as forgotten history. But the mind does not forget, because if it could, then everyday would be fresh, which it can’t. So no matter how far the movie goes about being a masala blockbuster, it still owes its existence to the event – to which it owes no debt. Irrespective of the claim to be realistic. Hence, it fails; in neither projecting even an inch to our perception of reality neither does it achieve the goal of becoming a complete fiction, something which does not exist. Artists lie in order to tell the truth, Bollywood films talk about the truth in order to hide the lies. Such films should not exist in representing wrong facts in actions, gestures and expression because these human emotions are so hard to live through that the mere distortion of them should be condemned in order to make money, because making money on entertainment is fine, but milking money out of cheap thrills and wrong facts is pernicious.

If you want to save the world, go ahead and donate to the Bihar flood or teach a poor street kid. If you want to witness chaos simply browse through hundred channels on your television, if you want to connect go out and meet people. If you want entertainment watch a film, any film, if it entertains without the pretence of research and realism.

The review is re-published here from my writing for www.upperstall.com

nitesh said…
Thank you for the comment Noni. The words of encouragement is much appreciated. :) Learning and improving:)
September 17, 2008 at 2:47 AM