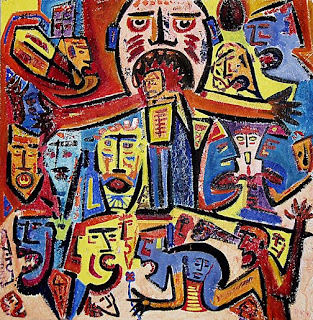 As against the art of acting, especially with facial expressions, the cops in the west have developed a science of facial expressions. It all started with a cop who was on patrol found three juvenile delinquents in an area known for violence. By the time the cop got out of his car with gun raised two of them ran away while one stood still. The cop pointing the gun at the boy, who was hardly fourteen years, shouted ordering him to put his hands on his head. The boy, instead, reached his pocket and came out with an automatic pistol. The cop who was concentrating on his face, held his fire. The boy dropped the gun on the floor and raised his hands in the air.

Later the cop explained that he saw only fear in the face of the boy and not anger that would be the kind of emotion that would have made the boy to take pot shot at a cop. The innocent Brazilian died in London recently as the cops involved had no acumen for studying facial expressions or body language or they interpreted them wrongly.

Some cops have come up with experiments where they found that constant use of simulated experiments of facial expressions of anger and fear actually increased the heart rate and also the adrenaline flow. This has made us change our opinion on `method acting’ where we asserted that the way you artificially move your body or move your facial muscles conveyed the emotions you wanted the audience to experience. Move a set of muscles in your face upwards and you simulate laughter. By the same token moving them downwards is synonymous to weeping. Now the same thing can influence your emotions that you are in real tears and in a depressed state of mind after enacting a tragic scene in front of the camera.

In my early days as a film audience, I hardly let myself to be influenced by a heartrending scene being enacted in a film. That was when I was comparatively young in body and mind. Most unacceptable physical heroics, where the lead player made a back ward somersault on the floor and took off backwards to reach the top of roof that was 15 to 20 feet above ground appealed to me a lot more than the rest of the narrative, till I reached my teens. On the borders of my manhood I was superimposing myself on the hero and was falling emotionally in love with every other heroine.

After more than 25 years of acting, directing two flop films and ingratiating myself with top echelons of the film industry, an average performance even by an unknown artist brings tears to my eyes. Now I realize why some of my fellow artists continued their emotions and tears long after the camera had stopped.

I had come across the case of a young hero who is supposed to fall in love with an obese woman of his mother’s age as per the screenplay actually trying to marry her, though he got out of that illusion after being influenced by another screenplay and another heroine. Similar emotions repeating constant facial expressions are likely to have a long-term effect on your body and mind.

Coming to the practical side of performing in front of a camera, I have one instant to quote from my own personal experience.

A director was taking a close up of the heroine’s father played by comparatively a new actor. The villain asks:

“I want a decision from you! What do you say?”

“I shall tell you tomorrow.”

The artist gives a long stare and delivers the dialogue. The director screams, “Use your head and think man; before you deliver the dialogue!” After five bad takes which had consumed about 50 feet of raw film and about one thousand rupees going down the drain not counting rupees 750 being half an hour’s cash flow in production costs, I offered to talk to the artist.

I advised the actor to shift his eyes to the tube light on the left, few feet above the face of the villain, come back and say I shall tell you tomorrow. When the director came back the shot was done in one take. There are other ways by which the same effect can be induced in the audience. The artist could have shifted his look to stare down at the floor and then come looking up and answer “I shall you to morrow.”

Now the essential difference between the above two body languages is that when the man looks upwards slanting his face to one side suggests he is planning some strategy to meet the situation next day. There is suggestion of a little more confidence in his attitude than when his goes down and stares at the floor. There could be a third way in which he might use another body language by just turning his head at the same level, scratch his beard or chin if does not have a beard, come back to look at the face of the villain and deliver the same dialogue. Here there is neither a scheming nor lack of confidence. His aim is procrastination or biding for time and a postponement. If in this case if he does not come back to face the villain and delivers his dialogue, an ingredient called fear is added to the lack of confidence.

Now facial expressions are something that should convey a thought process to the audience. To the American cop, a face reader, the boy’s face conveyed an expression of fear and that is why he held the fire even when the boy’s hand came out with a gun from the pocket. In the same token if a girl, while listening to the advances of an young man, widens her eyes opening her lids a little more than normal and moves her cheek muscles backwards towards her ears that would produce a smile exposing a portion of her teeth, she is supposed to be happy with what the boy has said. On the other hand, if the eyes are narrowed, brows shrinking closer together and lips gets compressed it means that she hates the idea. .


Chaaru Haasan is an award winning film actor. He won the national award for the Best Actor and also the Karnataka Government's Best Actor Award for the movie Tabarana Kathe, directed by Girish Kasaravalli in 1987. Charu Haasan is the father of the famous South Indian actress Suhasini Maniratnam and the brother of famous film star Kamal Haasan. Charu Haasan has also acted in several other Tamil and Kannada movies. His other notable movies include Dalapathi which was directed by his son-in-law Maniratnam.He also acted for a short time in Sun TV's serial Anandham

He will be contributing articles on cinema, acting and life in general for the blog.
Chaaru Haasan

Save Environment said…
I have been trying to follow the blog since its origin. I cant boast to say that I have read all the articles from the blog but definitely the distinct ones.

So far this one is the best in terms of giving some practical knowledge about the craft of acting, which forms an integral and one of the most expressive elements of representing a film.

The examples brought in to explain the nuances of acting was very much easy to ingest.

At the same time it was wonderful to know about Charu Hasan and his works about whom I was unaware till now. I am looking forward to experince ur two flop films and ur performances in near future. I know it was ur generosity Sir that U could be so humble. I would like to request Hasan Sir- if U can bring in some light in the following few topics :

1) Dead-pan expression and its probable use in Indian context.

2) The difference between the average craft of acting in India and Hollywood.

3) and an article on Method Acting in Indian context; explaining the SUPERSTARS OF METHOD ACTING from India. Read a lot about Deniro, Pacino and Brando. High time want to know about Puri, Shah and Kapoor.

nitesh said…
Interesting points Charu Sir, it just gives one an insight, that how much a slight change in glance can change the idea of a scene.