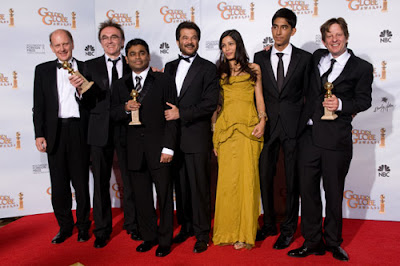 Anuj writes... On the verge of Oscars, a perspective to the perspective which questions Slumdog Millionaire, as being a derogatory prostitution to the West, of the realities which no one apart from us has a right to show (and see).

In the Slumdog debate, most of us, are the policemen. The cynics. We are the ones who cannot believe that a poor chaiwallah(tea seller) can win so much. It’s we who thus fault the film on what we assume is its incoherence with logic. The problem lies with us. Not the film. Read More

And...Slumdog Millionaire is not an Indian film.


Anya, writes on , " The Concept of Dizga Vertov's Kino Eye" and link.

After the 1917 revolution in Russia, cinema became the most important art, because it was considered to be the most “modern” and objective form of art and free from bourgeois influence. Besides that cinema became the main tool of agitation/propaganda/education, because the majority of the country was illiterate. Several propaganda projects such as Agit-train, Kino-pravda and Kino-eye appeared at those times.

One of the leading directors was Dziga Vertov with his cine-journal Kino-eye (KINO-GLAZ). It was not only series of documentary films but the concept which Vertov applied to all his works.
Read More 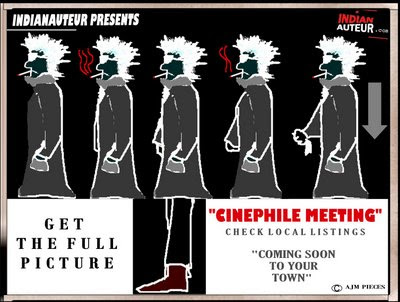 " The meetings are open to all, and are conducted purely for the love of cinema"
Topics: The Manifesto, State of Indian Cinema, Slumdog Millionaire

Idea: To share joys of cinema, learn about the medium, interact and build a team to foster criticism, production and exhibition of films.

All participation meeting will be published in the journal and further interaction will proceed on the site. For participation and details on venue and timing in any of the following city or if you want to organize on in your city.

* Dates, venues and timings are subject to change
* Please keep checking the blog for further updates.