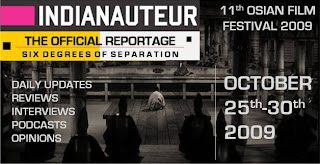 THE INVASION OF THE BODY SNATCHERS

Friday, 24th October 2009 saw the commencement of the 11th Osian Cinefan, the prestigious film festival that centers itself in New Delhi. The festival will be noted for the first significant instance of a major festival’s embracement and acknowledgment of changes in our mainstream cinema that they can see and we cannot. Thus, the fortress of Delhi, after much resistance from its enclosed and exclusive art culture, has finally fallen to the all pervasive market phenomena of Mumbai. It is an invasion, thus, of the old sacred space whose preservation is as essential as the protection of a national monument – for like the latter, the former is a document of the existence of a minority like us – a document we are not willing to let go of just as yet.Read More

The ongoing work of Cinedarbaar was briefly mentioned in the leading daily Times of India.

Popular flicks screened at multiplexes and on television no longer satisfy these `cinephiles' for their interest in cinema goes much beyond just watching a `good' film. For these new critics, movie viewing is serious business and discussing the nuances of each film transcending language barriers important.

Cine Darbaar, a film appreciation club in the city, calls itself one such group of cinephiles. Started by Nitesh Rohit and Supriya Suri, who come from a mass communication background, the club screens movies twice a week on Saturdays and Sundays. Twenty-three-year-old Suri said, "As an alumnus of a film school in Paris, I noticed the inability of some film schools to mould students such that they appreciate the history of cinema. I and my friend decided to start Cine Darbaar to fill this void. The club is simply a platform to watch and discuss movies.''

From the story line, narrative, camera work to music, sound and editing, various aspects of a movie are discussed here. "There are several film screenings, festivals and TV channels that show world movies, but our city lacked a forum where one could debate over movies,'' added Suri. Cine Darbaar also maintains a video library of its own and is now planning to hold a film festival in the city colleges in October to promote cinema from Taiwan. The club doesn't charge any membership fee.
Indian Auteur.com Osian Film Festival

Omar said…
I want to come and watch movies at Cine Darbaar. Great idea guys, hope you go from strength to strength in promoting the urgency of film education and culture. As for the Osian film festival, how important is it for the Indian film industry?
October 28, 2009 at 7:11 PM

nitesh said…
Thanks for leaving a comment,Omar. And you are more than welcome at our little film club.

Osian Film festival was one of the important venue for spreading cinephilia in India. But this year, the festival embraced Bollywood, the movies got lost in oblivion(with programming sucking big time)