… but not in that familiar Yellow Submarine. 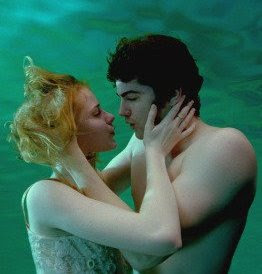 Living is easy with eyes closed, misunderstanding all you see.
It’s getting hard to be someone but it all works out.
It doesn’t matter much to me.

Jude Feeny (Jim Sturgess) is a Liverpudlian working as a ship builder. Yeah, Liverpool can be a lonely place on a Saturday night, and this is only Wednesday evening, yikes. So, he travels to the United States of America in search of his father, Wes Huber (Robert Clohessy), who works as a janitor (workman) at Princeton. He has never met his father and his father doesn’t even know about his existence.At Princeton, Jude meets Max Carrigan (Joe Anderson). Max is a young and obstinate chap who also has a cool accent. Max has a sister, Lucy Carrigan (Evan Rachel Wood), she is a lovely blond lady who gets a straight minus 3 since I dig brunettes.

Max and Jude move to New York city where they share a cool little apartment with
- Sadie (Dana Fuchs – how the fuck do you pronounce ‘Fuchs’?), who is an aspiring singer,
- Jojo (Martin Luther McCoy), who is a guitarist from Detroit, and
- Prudence (T.V. Carpio), a bisexual girl from Dayton.
Lucky for Jude, Lucy moves in with them when her boyfriend is killed in the Vietnam war.

Jude and Lucy fall in love, Sadie and Jojo fall in love and form a band, Prudence becomes weird (maybe suicidal) and Max goes to Vietnam. Lucy joins an anti war movement, Jude works as a freelance artist. Their relationship starts falling apart since Jude is not at all political. Sadie and Jojo’s relationship too starts falling apart since Sadie signs a record label and her manager wants her to quit the band.

Jude gets deported back to Liverpool and Lucy discovers that the people she was working with are making bombs so drops out of the movement. Max, meanwhile, gets severely wounded and gets terribly depressed."Jude reads in a newspaper about an explosion which, apparently, takes place in the same building where Lucy was working. He comes back to the USA, finds out Lucy is alive "

There are guest appearances by Bono (from U2), Salma Hayek (Frida), Eddie Lizard (the ’sexie’ dude) and Joe Cocker (don’t ask me who this guy is).

Corny? Alright, fair enough. But, let me ask you this …

Do you like the Beatles?
DO YOU LOVE ‘THE BEATLES’?
Have you ever heard (of) the Beatles?

I’ve never been a fan of musicals with an exception of ‘South Park: Bigger, Longer and Uncut‘. Across the Universe, however, got me hooked from the first scene (or song).
Apart from the numerous references in the character names (’Hey Jude’, ‘Lucy in the Sky with Diamonds’, ‘Dear Prudence’ etc etc) and the music featured, some of the scenes feature stunning cinematography. Sometimes surreal, sometimes bizarre and kooky, sometimes creating a ‘whoa’ moment and if you listen carefully you will hear a jaw dropping sound just about ……… NOW.
..

Anyway, being a fan of some of Julie Taymor’s (the director) earlier stuff, Frida and Titus, I am terribly biased to this one. Not that movie is bad, it is lovely, even though I went ‘duh’ at times there was a certain panache in the flow which was breathtaking. Having said that, at times I wasn’t particularly impressed by the dialogues. Infact I got up little more than a couple of times, tried to drag the media player progress bar but then *kaboom* a song by ‘guess who?’. I stand there with a look, one hand on the mouse and the other pulling the chair a little forward and my mind screaming ‘what the fuck just happened?’

Quibbles aside, I enjoyed this film. Maybe it was the fantastic four, maybe it was the brilliantly colourful mini-music-videos or maybe something else. While the main characters are wonderful, others can be painfully dull at times.If you are looking for an excuse for getting into The Beatles, its a good start. If you are looking for a multi-dimensional love story go and rent/buy/download some Wong Kar Wai stuff OR Before Sunrise and Before Sunset. If you are a Beatles’ fan but are feeling too lazy just pop-in a CD and go to bed – you can always catch it some other time. If you’ve already watched it, hated it and are cursing me, “hey, piss off, no one forced you to read this. And, well, on a positive note there are always blue meanies, unidentified flying cupcakes and a yellow submarine.”

Have you ever been in love?

Ah … Love … the word sort of eclipses a part of my brain.

Is that a yes?