I was working on a short film when my eyes fell on this book. Even though I was not well acquainted with Kurosawa san films, as my attention mainly lay on Yasujiri Ozu and Kenji Mizoguchi, however, something about this book attracted me a lot, a certain kind of force. Eventually few days later my girlfriend (a big time cinephile) gifted me this book, thanks to her, my interest in Kurosawa san then grew. Everyday after the pack up, the only thing I ever looked forward to was reading the book. The day I completed the book I felt very close to the maestro, as if he gave us a sneak peak to his life. The book not only gave a glimpse of the great director formidable years, but provided a rare account on his aesthetical and his cinematic upbringing. The loss of his brother, the fencing classes, how Toshire Mifune got his break and much more, before keeping down the pen with the release of Rashoman.

One of the interesting elements I read in the book was how much Kurosawa san put an emphasis on the overall growth of a person in order to be a director. It was under Kajiro Yamamoto that Akira Kurosawa got a break as an Assistant Director, and it’s under his guidance and freedom that he got a chance to learn about every department in the filmmaking process, and slowly but steadily build his aesthetic discourse. Not many directors in the world would allow such a thing, and the amount of trust which Yanamoto san had on his young Assistant Directors was amazing. One memorable anecdote from the book which illustrates the fact, “Yanamoto san had trusted Kurosawa and his other members to shoot a particular scene, which they did, and Kurosawa san believing he had got it right was pleased with himself, however, when Yanamoto san saw the rushes, he knew it was no good, but he didn’t let his rejection come on the face. When the movie finally released he took Kurosawa san and others to the theatre, and to their disbelief the footage they had shot was used, and Yanamoto san had used it to let them know how bad it was; which they realized… No director or Producer would think of doing such a thing and risking his own neck to the gallows, but their are exception and Kajiro Yanamoto was one such wonderful exception largely forgotten in the world of cinema today.

This is the kind of environment which really allowed the young Kurosawa san to mature and really focus on the aesthetics and elements which would later be an integral part of his oeuvre. A very interesting element which comes to my mind is how the Assistant Directors were selected by the Studios back then. A rigorous examination was held in picking and rejecting people for the job, this not only allowed people from various background to break into the industry and slowly pave their way into Directing and other department. Beside such a system is a far cry from the current nepotism which engulfs the industry all over. Kurosaw san makes it a point to advice and outline reasons towards the growth and development of young filmmakers. The book gives an amazing glimpse into the rare gem that was Kurosawa san. And at the same time it allows us to be part of a Japanese family and explore the tradition, the culture and the history of , something which Yasuijiri Ozu films were about, and whom Kurosawa san admired a lot, along with people like Kenji Mizoguchi, Vincent Van Gogh and John Ford.

As I was reading the book, I started spending a lot of time watching Kurosawa san films. The first film which I saw was Ikriu, and till today as I write this piece, the movie is fresh and playing in my mind. Ever since, I have always gone back and revisited most of his films again and again, not only for the viewing pleasure, but also how much his films allow you to sip into the culture and the heritage of Japan, and above all, for a person like me who is interested in the art of filmmaking, his movies are a text-book of innovation. 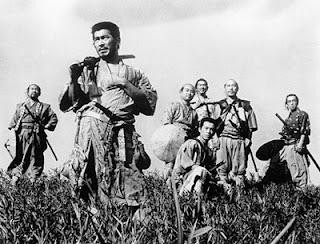 A common tapestry runs through all his movies, meticulous mise-en- scene, a great narrative focus and perfect use of sound and score, and while watching his films one knows that one is standing on holy ground witnessing life - The final battle sequence in Seven Samurai, the clever use of ellipses at the end of The Bad Sleep Well or the hoarse voice of Kanji Watanbe singing as he swings away on a cold winter night are few moments which shows the power he had over the usage of image, sound and space and how well he could combine this three elements, and intertwine figments of imagination and yet confront us with realities of life. Kurosawa san movies not only allows us to experience something which we haven’t seen before, but it also gives us a glimpse on various stages and periods of Japanese culture and society, even though he was said to be the most westernized of the Japanese director’s his movie functions as a social critique of the Japanese society. Moreover, his focus has always been in underlying the various aspects of human emotions, the way we act, the way we behave and our relations with the landscape and surrounding, and above all, Kurosawa san movies are universal in their portrayal of humanity.

Akira Kurosawa’s Something like an Autobiography is a fitting companion to his overall works. The book serves the purpose well in showing the other half of Kurosawa san life, leading up to Rashomon, and it’s fitting that the book ends exactly where it’s supposed to, not one word more and not one word less. As beyond that, everything what he was, is present in his great works. Every word in the book is memorable, ever line, every sentence is dynamic and visual just like Kurosawa-san movies, this is an amazing book, which anyone who is remotely interested in Cinema should read, and for people whose lives has been touched by Kurosawa san films and for budding filmmaking- this book is a must read.

Just Another Film Buff said…
Extremely well written... The exact feelings were evoked when I read it too. One can't but be amazed at what Yamamato did. And the AD recruitment is the cherry on the cake. Wish we had qualifying exams for directors too!
June 21, 2009 at 8:38 AM