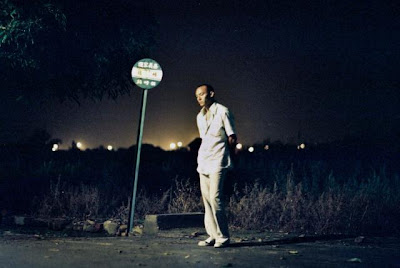 I haven't been writing much lately, but a number of activities are taking place on the ground to take cinema and discussion to a whole new level. In the span of two weeks we've managed to hold two big cine experiences and each one of them had people from all walks of life turning up for the screenings. The just concluded Shakti Samanta retrospective ran to packed houses and people where more than eager to participate in the discussions. A full report with pictures would be published soon. Cine Darbaar has been instrumental in the last six months to push towards several initiatives such as film festivals, film appreciation and workshops. The just concluded Shakti Samanta retrospective was the fifth cine experience by the group.

Court is in session


A six-month-old group of Delhi cinephiles is hoping to popularise World Cinema in India, reports Ajitha GS.
On January 1 this year, a group of young cinephiles came together and formulated what they called the “Delhi Manifesto” (www.indianauteur.com/manifesto.php). Among other things, it condemns snobs and pseudo-intellectuals, while also damning the ignorant who “have become so used to a cinema that’s meagre that they are satiated with films from the West” (read, Hollywood). The manifesto itself is typical of a group of youngsters – the average age is 24 – who are angry about the state of the world and want it to change immediately. But this bunch also has a definite plan of action.

In the past six months, Cine Darbaar (as the group is called) has organised an Iranian film festival (February), a Russian film festival (May) and, this fortnight, a Taiwanese festival. Cine Darbaar came together under the initiative of Supriya Suri and her partner Nitesh Rohit, and has grown to include 11 other members. “We hope to promote an understanding of cinema not just in Delhi and other big cities, but also in small cities and rural towns,” Suri said.

“Cine Darbaar organises cinephile meetings in various places. We’ve been working through friends and acquaintances until now, and have regular meetings in Patna, Pune, Hyderabad, Delhi, Jaipur, Chidambaram, Dharwad, Digboi and Gwalior,” said Suri. These meetings are quite a formal affair. The Delhi gang chooses a theme for the month, and relays this to all the centres, which then meet and talk and send a report back to Cine Darbaar. If all this is sounding just a little Stalinist, you’ll be happy to know that these notes then go up on www.indianauteur.com, the group’s e-zine. The website does not restrict itself to world cinema. There are features, articles and reviews on a range of topics, from German expressionist cinema to Delhi-6 to Ritwik Ghatak. (There is also a long and involved interview with Ghatak that’s translated from Bengali.) The group’s passion for taking the action offline is commendable, as is its strategy. In all the events it has organised so far, Cine Darbaar has tied up with the foreign cultural centres in Delhi. This helps to organise both the required permissions and the screening venue. Suri also said that she and her colleagues refer to these festivals as “cine experiences”. “We distribute film reviews and information about the director, and discuss the director, the director’s style and even the culture of the country the film is from,” she said. “Then we see the film.”

This fortnight’s Taipei Cine Experience – organised in collaboration with the Taipei Economic and Cultural Centre – showcases films by directors who represent the Taiwan New Wave, Suri told us. “All these directors were shooting films with a static camera, long shots, very minimal movement – everything was very minimal, even the stories,” she said. The films by Hou Hsiao-hsien, Tsai Ming-liang, Yang Ya-che and Wu Nianzhen are, by and large, not the filmmakers’ newest films. “The movement started off in the ’90s in Taiwan,” Suri said, when asked whether this was a deliberate decision. “Also, we don’t feel that only contemporary films should be shown.” She did admit that it was easier to get screening rights for the older films, though.
Cine Darbaar is now working to set up a “settled film club” that will organise regular screenings in the city. Suri said that it should be in place by the end of the year. We’ll be tracking them, so watch this space.

Ang Lee might be the most famous Taiwanese filmmaker, but there are several crouching tigers and hidden dragons out there. A festival of Taiwanese films, being held over the weekend, celebrates them.

“On offer are five films from Taiwan New Wave Cinema that dates to the 1980s. The country’s chequered political history, having been ruled by the Japanese and the Chinese, had affected its cinema. It was only with the 1980s New Wave movement that Taiwan began to find its own cinematic vocabulary,” says Supriya Suri, co-founder of Cine Darbaar, an organisation that is holding the “Taiwan Cine Experience 2009” in association with the Taipei Economic and Cultural Centre.

Any festival of Taiwan New Wave must include Hou Hsiao-Hsien, so the “Cine Experience” kicks off with his Zui Hao De Shi Guang (Three Times). It’s a series of three stories that shows a transition — in the first two, letters play a pivotal role, while in the third cell phones, text messages and the Internet take over. “The tales span from 1966 to 2005 when words become more free and communication recedes,” says Suri. The film also has an unlikely Bollywood angle — Imtiaz Ali’s forthcoming film Love Aaj Kal is said to be its rip-off

Apart from the urban portraits in Tsai Ming Liang’s Dong (The Hole) and He Lious (The River), in which water becomes a symbol of social dysfunction, there will be Yang Ya Chen’s Orz Boys, a tale of two mischievous boys called Liar Number 1 and Liar Number 2 who are faced with the twin problems of staying out of trouble and growing up. But it is with a special film that the festival closes. We Nien Jen’s Duo Sang (A Borrowed Life) is about Sega, born in Taiwan under the Japanese rule and out of sync with the Mainland Chinese authorities who took over in 1945. “We are screening a rare sample piece because most prints are lost,” says Suri.

New Issue of Indian Auteur and the new forum to be up soon. The Indian Auteur Forum has been down due to the database getting deleted by accident.

just another film buff said…
Oh, congrats... That's some pace. It was natural for people to turn out for the Shakti Samanta film fest. It's been really long since we saw some good Indian films...Hope the fervor remains...Cheers
July 14, 2009 at 1:21 PM

nitesh said…
Thanks for the comment, JAFB. You know no matter how popular a film or director is, its very difficult to get people to come and watch films without any marketing or media planning strategy. And with every subsequent Cine Experience we were learning how to go about things, and with this one things just feel in the right places. I guess from Russian Cine Exp it started on.
July 14, 2009 at 10:49 PM