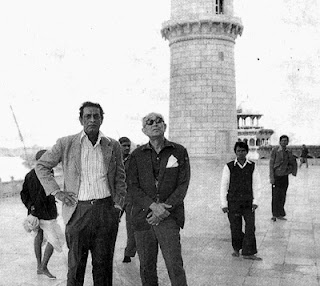 Yep, the whole documentary. And its really interesting one. I think we should discuss more as people see the docu.

Secondly, in the second part of the documentary there is an interesting sequence of Smita Patil in a dubbing studio and I was fascinated to see her dub and bring out so much into the voice. One great actress.
July 27, 2009 at 9:21 PM

Just Another Film Buff said…
Rule number one: Anyone can act. No training is required.

omar said…
This is an essential documentary - I never knew it existed until now; and also shot by Govind Nihalani. Did Benegal make any other documentaries - if he did then why is so much of his early work so difficult to access?
August 5, 2009 at 2:03 AM

Yayaver said…
Splendid job boss. what a rare piece. Will be spreading word on existence of such documentry to cinephiles.
August 10, 2009 at 3:10 PM