The Journey to Odessa, And the Return from the Zone 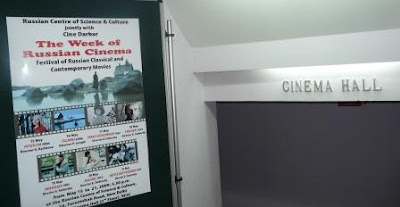 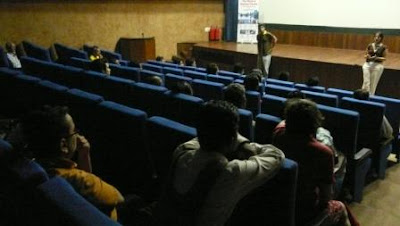 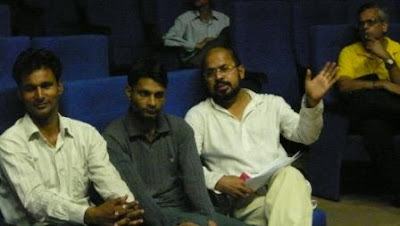 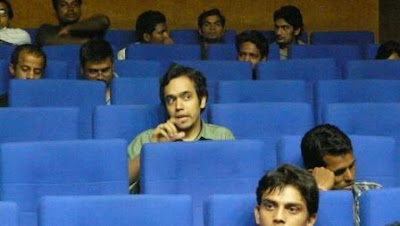 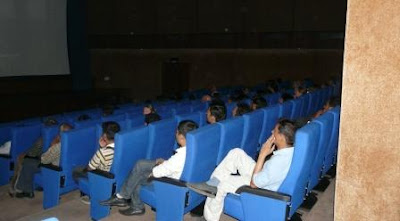 A report on the recently concluded Russian Cine Experience.
The programming for the week of Russian cinema was planned in way that one moved back in time from the contemporary Russian cinema to a retrospective on Tarkovsky and then back to 1925 through Battleship Potemkin.

After the inauguration which involved the lighting of the lamp by young cinephiles, the series of screenings commenced with Oksana Bychkova’s Piter Fm, a film disliked by all are team members but liked by the audience. And since the first day is always difficult to break the ice among the audience, this conflict was the perfect provocation for the audience and the team to get involved in an active discussion on the film.


The next day, Ostrov/The Island by Pavel Lungin was screened. The film is about a spiritual transition of a guilt stricken man, and how he overcomes the fear of death by the end of the film. Anatoly, the father of the island, had once killed an innocent man during the war, and starts living as a priest who can heal the people suffering from any pain. The film was shot on cinemascope and this was the trigger point of our discussions. Such a move was thought of by many as being too academic, and too biased towards the ‘technical’ side of things. Cinema without technical aspects is not possible; rather cinema began with technology and later became an aesthetic principle. Our emphasis remains on the appreciation of the film form. The construct behind an idea, the cinematic foundation of a thematic skyscraper – which also remains the focal point of our discussion. But to reach that level we did realize it is important to first understand the audience and then try to reach such points in a better way, without making it sound too educational.


The retrospective began, predictably, with Ivan’s Childhood, the first feature by Tarkovsky. A lot of people did not favor the idea of showing his films as he is already very popular and has been shown worldwide but our reasons were simple - not many of us understand him. Hence we felt even though the film might have been screened a number of times, it demanded a more thorough collective understanding.


The discussion that followed was eventful, in that it featured walk-outs, vehement oppositions, and solemn acceptances. People assumed, because of our love for Tarkovsky, a disdain for the mainstream in our tastes – and therefore, even a slight hint of Spielberg bashing was jumped on, and squashed on by paranoid and hysterical audiences. Of course, they could not appreciate an obvious, and yet conversely, barely obvious distinction between good and bad cinema; instead perceiving our effort as being a celebration of the off-beat and a derogation of the mainstream. The discussion also piqued interest in the topic of cinema’s isolation of itself from theatre – and even though it invited uninformed opinions, it is a cause one would like to inquire deeper into. The 18th saw the screening of Stalker, which resulted in completely anticipated audience walk-outs.

On the other hand, there were first time viewers who were pretty intrigued by The Zone presented in the film. And it was today that we had one of the best discussions of the entire seven days. Starting from our own interpretation of the film, going towards what the director wanted to say and how he wanted to say, everything was discussed which went on for around forty five minutes. Today was a day when one realized while there are viewers who are obviously not interested in exploring different cinema but there are many in our city who when showed something else are willing to stay throughout the film and the discussion. It’s probably the first time that discussions are taking place here in Delhi, and we love that people love to be a part of it.


Nostalghia, the first film that Tarkovsky made outside Russia, held an immense interest in a lot of people today. By now we were already familiar with the crowd that was coming every day. And although today there were not many people for the discussion but those who did stay back, it was very evident that it was for the need to understand the characters and the film much more, so did our time. The most wonderful thing that happened today was that we realized how through discussions and questioning yourself you finally find a path toward understanding the director and the piece of work much more. And those who came every day as just a viewer, not from a film background, much to our glad notice - could observe through three films till now by the same director, his use of water, air, grass and how he uses the tracking shot to pervade the water etc. There were instances when we had organized a film festival with some organization who had been working in such field for years and refused to organize discussions claiming the audience does not stay back and they don’t want it. Someone would want to eat their words now.


The last day was a sort of our cinematic return home – to our roots – to the films made by one of the fathers of modern cinema – Sergei Eisenstein’s Battleship Potemkin, a film so vividly a depiction of a political stance through the medium of cinema that it could not help but involve people. That it did so after 84 years of its release makes the achievement more staggering. The tragedy of the sailor was still afresh as ever, the wound still uncomfortably moist, and the soup still boiling. The discussion on the montage and its invention was accompanied by reminiscences of audience members of the good ol’ Calcutta days when film clubs would screen the film – as both a mark of protest and of impression. We also recorded, with pride and surprise, the largest audience turnout for a discussion, as around 70 people stayed back; perhaps as a tribute to one of the greatest films of all time, or as a courteous approval of our efforts of the last week. Whichever, it made us pleased. Thus, with the feeling of a job well done, and the excitement of other such jobs in the near future, the festival was officially declared closed.

The new Issue of Indian Auteur with updates on the just concluded Taiwan Cine Experience and the upcoming dates and info on the Cinephile Meetings- August 2009 will be online on 14th of July.

HarryTuttle said…
Thanks for the nice report!
To further the discussion, here is a podcast on a documentary on Tarkovsky, around the retrospective in New York (25').
July 5, 2009 at 1:50 PM