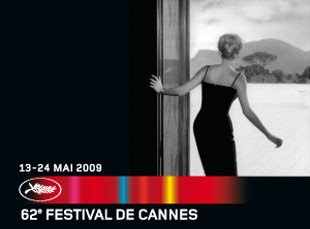 Looks like a no of heavyweight auteurs are competing for the Golden Palm this year. The festival opens on May 13 with Pixa'r "UP" (for the first time in the history of the festival) and closes on May 24th with Coco Chanel&Igor Stravinsky.

India like every year is missing in action. But, I'm sure, it hardly bothers our "creative mainstream Industry" they will still land up at the festival through the Indian Booth section and our media will report their presence as if they just conquered Mt Everest- even if most people fail to recognize them." We make films for masses not film festivals" is one of the favorite cliches of our Industry. So without further ado...let's move on to the lineup. The Director’s Fortnight and Critics Week will be announced tomorrow.

"In the Beginning," Xavier Giannoli (France).

"Map of the Sounds of Tokyo," Isabel Coixet (Spain).

"Nobody Knows About the Persian Cats," Bahman Ghobadi (Iran).

Anuj said…
Cannes has made it a habit to deem the unusual suspect the winner. Often enough, a small film from among the obvious heavyweights wins the grand prize. With such heavy auteurs(Haneke, Campion, Von Trier, Chan Wook, Almodovar, Noe, Resnais, phew) around, I think Arnold, Mendoza, or Coixet might sneak through.

Though I get a sinking feeling that this will be the year for the double whammy for Tarantino, considering the buzz. Interesting.

And yes, your observation about the conspicuous by its absence Indian cinema is so true. If we win, we will cover it for 100 years through our media, and if we lose, pooh, we never needed the West's approval.

Also check the credit lists of all the films. Even if one random forgotten Indian's on one of them, we are going to be jumping high about how the film is so good only because he/she was there. It is pathetic.
April 24, 2009 at 2:04 AM

Let's see who bags the winner, but the lineup is surely exciting. I wont place my bet on Tarantino to win this one, but then you never know.

Checked the list properly even the Directors Fortnight and short film category...I guess we missing from everywhere.

srikanth said…
Will these flicks ever enter India? :) Perhaps the most enviable list in a film fest I've seen - surprising, considering the fact that all of them go strong on the director's name alone.
April 26, 2009 at 8:53 PM

Plenty heavyweight auteurs are competing for the top prize. So this year is definitely interesting. Beside been reading that Bruno Dummont new film didn't not make the cut.

I think some of the films will land up in India. With three major players in the market- UTV, Palador, NDTV Lumiere I'm sure we are going to some of the films on our screens, television and on DVD sooner than most countries in the world.
April 26, 2009 at 11:58 PM