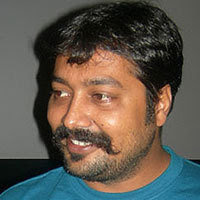 A massive presence among us – Anurag Kashyap, we let him another sip on his Margarita. For the most part, we were poking, biting, probing, and seeking; for the remaining, we wanted to let the interview become a discussion between our favorite type of people – people who love cinema. Indian Auteur talks to Mr. Anurag Kashyap.

NOTE – A lot of discussion off-the-record remains unpublished, for the fear of inviting controversy, no more of which, Mr.Kashyap seems to be very welcoming towards now. I can only assure the gentle reader that he stands to miss a lot, but then, such is life.

Plus- Those who have missed, do check out the legendary debate between Anurag Kashyap his band of followers and us.

How did your vast reading of the Hindi pulp novels help in developing your screenwriting style?
I would have to say that I am not consciously aware of any such influence. As an afterthought, however, I would have to say that they did help. I was a person who could not speak English till I was 17, and all my reading was based only in Hindi. Thus, yes, I can now count reading of those novels as one of my formative influences.

After you came to Delhi, you became involved with the Jan Natya Manch, an organization which performed street plays. Did that influence your filmmaking in any way, since your films seem inherently devoid of theatre as such?

Yes, there I agree with you. My films would not betray influences of theatre, except Gulaal, which carries within it, indelible, and obvious influences of the medium. For instance, I met Mr.Piyush Mishra while working for Jan Natya Manch, and it was there that I first saw his recitals, and it was there and then that I took a decision to use him in one of my films, which eventually, turned out to be Gulaal.

You wrote that 2009 would be a turning point in Cinema, so what exactly do you mean by this turning point? In what context, would we see a change hitherto unseen?

In the sense that independent films, made by people working outside the studio system, produced by independent producers, would find themselves being released at a popular scale. For instance, January 30 saw the release of Luck By Chance, the subsequent week saw the release of Dev D., and then there were films like Delhi 6, which though a failure, can be termed an ambitious failure. Recent weeks have seen a simultaneous release of films such as Barah Aana, Firaaq and as such. Read More


Indian Auteur articles on his films and more: