Are you a dreamer? 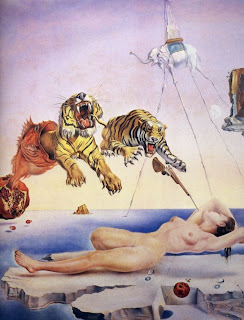 It’s really weird when the blurring between reality and dreams starts fading away. Life is no longer in the binary mode, where everything can be classified as either real or imaginary. It’s ridiculously insane as if someone planted some memories into your fucking brain and you have no idea whether those events actually happened or it’s just something you are making up.

Something similar was happening to me. I couldn’t exactly recall but there were certain events which happened in the night and I was unable to recall the sequence of these events.

Drinking coffee in the balcony and trying to find some meaning in the strange patterns I observe, be it clouds or the floor tiles, is something which gives me a natural high. The patterns mean nothing just like life. There is no sense of connection between any two patterns/events in life. It’s just bland. Thinkers have spent eons finding the purpose of our lives. Pessimists would say maybe life has no purpose at all,

Maybe it is all an illusion,

Maybe people are just looking for something which is not tangible at all.

Anyway, that is life, and let me tell you, it fucking sucks.

Before I continue with this rant, nothing great happened today. I went to office, did what I do best, came back home, had dinner (which was awfully boring) and got back to finding patterns.

So, where was I……yeah life sucks? Why does it suck?

The simplest answer is that it gives us no sense of purpose.

“One thing that makes humans different from animals is that knowing we are going to die someday, and it’s only us humans who think about the afterlife, what will happen after we are dead?"

A friend of mine once said what makes us different from animals is the thought that we are the most intelligent species in the world. He is an animal lover (and a hard core veggie) by the way.

As humans we have a deep desire of conquering everything. We started with cities, provinces, kingdoms, countries. We will continue to push boundaries when it comes to space exploration, although till recent time we were not even sure of how many planets we have in the solar system, but we are kicking ass. Humans are always ascending, and they will continue until they can reach the next level of existence.

What is this next level? No, I am not going to talk about Gnosticism or trans-humanism.

Death is only the beginning, the beginning of an end. “The worst mistake that you can make is to think you’re alive when really you’re asleep in life’s waiting room” — a dialogue from Richard Linklater’s rotoscoped masterpiece “Waking Life”.

"Dream is Destiny", that is what the little girl said in the beginning of the movie. Is it supposed to mean anything? Is death the only true purpose of life? Is death synonymous with sleeping or it is just a glorified term for the sense of being awake?

I have no fucking clue what the hell I am typing.

It’s late in the night and I can hear a faint sound of something or someone.

Looking outside the window, it seems something is different.

The lonely tree appears to be standing on a small oasis in the middle of a vast ocean.