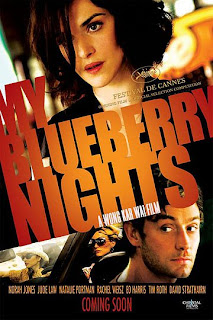 I haven't started eating blueberry pies like Norah Jones, but I finally managed to watch a Wong Kar Wai movie on the “Big Screen” . While in one could watch WKW movies only on Bootleg copies or purchase an original DVD/ VCD of 2046, the only WKW movie distributed officially in by 20th Century Fox. Even before I left for , my dream was to watch a WKW movie in the theatre, a dream unlinke the protagonist of WKW who keep wandering for destinations, but I finally found mine here in .

My Blueberry Nights is yet another movie about loss, love and meditation by the most stylish post-modern auteur to emerge from . This is WKW first foray in an English language domain, and sure the movie lives up to the brand name that has become WKW- lush, stylish and well composed visual and music which acts as a let motif throughout the movie, and characters who quote as they please from literature preferably Latin, Chinese or Japanese are all present. But the overall touch and soul of WKW previous movies are missing from action.

The movie deals with Elizabeth (Norah Jones) and her recent break up followed by spending nights eating blue berry pies at Jeremy’s café (Jude Law). And one fine day she decides to leave the city and travel from one place to another meeting different people, all having their own share of losses and tragedy, their addictions and her dream to buy a car. With WKW movies being incomplete without metaphors the film included a key box and the circle, which hold true for Elizabeth as she beautifully comes back at the end from where she started because it is always better to cross roads again if you have someone waiting for you on the other side. 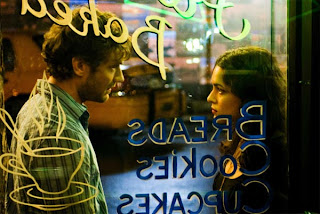 The overall look and feel of the film was very appealing with every scene almost providing us with shades of neon lights along with colors but with such fabulous photography it was hard to believe in the actors and the voice over. The relationship that the director was trying to establish between Elizabeth and Jeremy somewhere didn't quite come across well and unlike his other movies, this one does not seem to be a step forward. The typical slow motion of his scenes sometimes seemed to be overdone and this time his jump cuts were more obvious than a surprise. The music has been a hallmark in his movies, and it reminded me of In the Mood for Love. The shot of door getting shut at the café brought back the images of 2046.

The look dominated the other elements throughout the film. It did bring in some disappointment being a WKW fan. The movie has more style and less substance, a beauty with no brains, with close collaborator William Chang out doing himself again in meticulously crafting the design of the movie, and Darius Khondji stepping in the shoes of Christopher Doyle and he sure does not allow his absence to be felt.

My blueberry Nights certainly has everything that a Wong Kar Wai fan would want from his movies, but this time around this very elements does not allow the story or the characters to be felt or come close, it somewhat distances them and instead of allowing them to expand, and become part of us. Preferably this new venture will win him new fans, and at the end when the credit rolls Wong Kar Wai fans will carry the visual and music will keep revolving in their head but the characters will all be missing in a story of about a blueberry pie.

nitesh said…
lucky u, we won't get a chance to watch it here back in India. Wong Kar Wai quite frankly has exhausted his own style in this movie, and seems to run out of steam, just checked rottentomates, and reviews lies at 60% pretty low for a wkw movie. a collective disapproval.Yet, im sure all of us who admire WKW would give it one damn shot. Excellent review, keep it coming.
December 14, 2007 at 12:11 PM

Anonymous said…
Yeah true, no WKW movie is complete without multiple viewings. But what would make someone want to watch My Blueberry Nights again, does it have that enchanting replay like his other movies.
December 14, 2007 at 11:47 PM

Anonymous said…
well certinaly apart form acting and story the camera the whole mis-en-scene creates the enchanting re-view like his other movies...