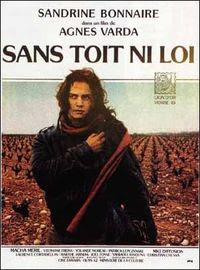 Studying in a French school and not knowing the language, I sat in the projection room waiting for the movie to begin and hoping SANS TOIT NI LOI will be played with English subtitles, and guess what lady lucky was on my side. And their started my short journey to see a journey of Mona (played by Sandrine bonnair)

"Without roof or law"

The middle path as the philosopher quipped is the path between freedom and loneliness, a path which Agnes Varda has preferred for herself in Cinema, known for her honesty and originality as a filmmaker. And her methodology and aesthetics which are deeply rooted in documentary realism and feminist issues. While a thin red line of social commentary cane be seen running through her movies.

Vagabond is about Mona who wonders and withers from one place to another affecting the lives of people before her death due to Hypothermia. The interesting part is the way how the narrative flows and the story is being told, the flashbacks of the girl and the witnesses of her life being interviewed by someone off screen, as if they straight spoke to the viewers. The movie commences with the dead body of the girl, accompanied by a voice over a landscape which said "I know little about the girl myself but it seems to me that she came from the sea", said by the director herself and then the shot cut to the sea from where Mona comes out naked. An aimless road trip for Mona who enjoys music and dope, and does not mind working on any short term job for some money once a while. 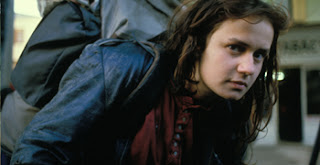 Meeting people along the way she sometimes stays with them if they are helpful, and even works, though she doesn't mind putting her tent anywhere and staying there. The story shifts from the life of homeless Mona to the documentary like interviews throughout the film. She happens to meet a philosopher on her way he chooses the middle path between freedom and loneliness unlike Mona's who was lingering around with both (reason why I just picked the philosopher only form her journey because I found the conversation of freedom and loneliness interesting) but sometimes later she does get tired and fatigued by her life.

Agnes Varda rooted interest in documentary and intellectual cycle comes to full circle in the movie- And on one such cold day searching for food and tortured by the villagers her state of destitute brings her bleak journey to an end, and the movie comes back to were it started, with her dead body lying on the field.

Anonymous said…
intersting post ...made me to think about my one of the all tie favourite movie
Diarios de motocicleta aka the motorcycle diaries !! to b very honest im nt a very big fan of woman based movies coz nearly all of dem are based on social taboos like volver ( one hack freak movie drove me nuts ) or fire water etc!! or may b i hav nt seen much of dem..any recommendations?? stryline seems prety interesting ....freedom n lonliess are both infinite topics ...and wat conclusion did u make abt it?
cheers!
December 22, 2007 at 2:57 AM