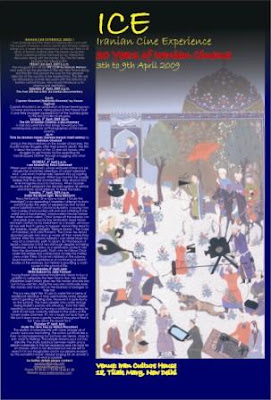 The Iranian Cine Experience is the fruit of the hardwok poured in by our Cine Darbaar President Supriya. The cine exp will travel across India. It will start in Delhi and travel to Orissa and than we will do a small mini- cine experience for kids in an Orphanage in Hyderabad. That will be hosted by our man Shubhank. The second and the concluding leg of the Cine Experience will happen in May which will be followed by the Taiwan Cine Experience. So good times ahead for lot of learning and film discovery.

Cine Darbaar and Indian Auteur with the support of Iranian cultural centre and Khane cinema brings you a week long experience of the best films in 30 years of Iranian cinema after the Islamic revolution. Each screening will be followed by an interactive discussion along with the Iranian Tea. The first series includes the following film:-

The inaugural film will be THE COW by Dariush Mehrjui, who said to be the pioneers of the Iran New Wave along and the film that paved the way for the greatest directors of the country to be inspired from. The film will be followed by a small discussion with the Director of Iranian cultural House, who would introduce us to cinema and aesthetics.

The river still has a fish: An Iranian Documenray

Captain Khorshid is an adaptation of Ernest Heminway's To have and have not, taking place in the Persian Gulf: A one-time smuggler squeezed out of the business goes to the aid of political refugees.


The DPs of Iranian Cinema: a documentary

A rare documentary that brings forward you the contemporary director of Photographers of the Iranian cinema.

Living in the impoverished on the border of Iran-Iraq, the Kurdish family struggles after their parents death. The film is about the journey of the 12 year old Ayoub, who struggles to get money for the operating his handicapped brother through smuggling and what follows.

Fifteen year old Taraneh, whose widowed father is in jail, refuses the unwanted attentions of carpet salesman Amir - until Amir's mother talks Taraneh into accepting Amir's marriage proposal. Within four months the couple realizes that they are incompatible, they divorce and Amir immigrates back to Germany. When Taraneh discovers she is pregnant she decides against all advice and intense social pressure, to keep the baby.

Reza Mir-Karimi's `Zir-e noor-e maah' (`Under the Moonlight') is an appealing if imperfect attempt to show something like the series of experiences that turned prince Siddhartha into Gautama Buddha. A young man has a series of encounters with evil and suffering in the world and is transformed.

Unfortunately minutes before the street urchin called `Chick' jumps off the subway car and steals pure country boy seminarian Seyid Hasan Ahmadi's clothes for his investment as a shaykh, we know all too well that it's going to happen. Iranian films tend to the fatalistic. Magid Magidi's `Rang-e khoda' (`The Color of Paradise') and Jafar Panahi's `The Circle' are about doomed people who end up worse off than where they started. After the subway robbery I was afraid Seyid too was on a cinematic path to doom. But the beauty of Seyid's character is that he's still tough despite not being streetwise, and his status as a seminarian protects him from the downward path. That's why he follows Chick under the bridge and comes back to help the motley crew under there. Once he's robbed on the subway, Seyid maintains a semblance of continuing his Islamic studies at the seminary, but Tehran is providing a crash course in the school of life.

Young Razieh (Aida Mohammadkhani) needs to buy a goldfish to celebrate the New Year in Iran. Her mother (Fereshteh Sadr Orfani) gives her the money and she sets out to buy said fish. Along the way she continually loses the money and must rely on the kindness of strangers to help her.

This is a very slight film. It's plot is wafer thin in terms of traditional narrative, it may well frustrate many viewers with it's gentling strolling style. However it is quite funny on the surface. The many people who come and go during Razieh's journey are amusing - from the tailor berating a customer for having a small face causing his shirts to not look correctly tailored to the antics of the honest snake charmers. It's not a laugh out loud type of film but it does have a gentle humour throughout that is fun if you are in the mood for it.

The realism of everyday life with some strange air of poetic aura was fascinating. The action just floats like a river, no big happenings but pictures are dense, close to skin, close to feelings. The people dreams pour out into daily life. The shaky balance between reality and a dream culminates in the last sequence and we hope for an answer, which is not disclosed but we are left to search it in our imagination and in our dreams evoked by this wonderful movie. Maybe longing for an answer is all what is possible.

The programme can have last minute changes for further details please contact:

Anonymous said…
Whoaaaaa.... Rare films indeed. Great work. Hopefully the discussions continue on the forum too...
March 26, 2009 at 7:28 AM

nitesh said…
Yeah Srikanth it's gonna be some fun. I haven't seen a lot of films that is programmed in the two cine experience and hopefully its gonna be one nice learning experience.

Along with this I'm looking forward to the Taiwan cine exp... that if we get all the movies would be another experience for people here. We already have Three Times cleared for rights..let's see if we can get more films.
March 26, 2009 at 11:10 AM

Anonymous said…
Man, I wish I could be in Delhi for this one. Will definitely check out the festival in May.
Good times ahead.
March 26, 2009 at 3:52 PM

Anonymous said…
Hi Nitesh, was wondering if you are aware of the Delhi NCR IndiBlogger Meet 2009 scheduled for the 4th of April. Would be great if you can make it and blog about the event too.

Please send in your ideas for the agenda in the comments section.

Kshitiz Anand said…
I am sure this is going to be one awesome experience!
Would have surely loved to see a lot of these films, but cannot make it to this one.
May be next time :)